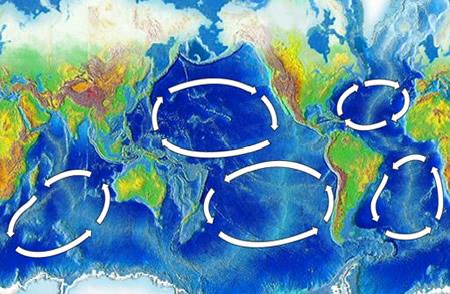 Think about the last time you got takeout or ate at a fast food restaurant. Or the last time you bought a pre-packaged food item from a store, or drank a bottle of water or soda. Chances are, plastic was involved in all those items — plastic  that will still be around up to 1,000 years from now.

Americans throw away over 30 million tons of plastic every year, of which only about 25 percent is recycled. The rest goes to landfills. Unfortunately, the largest “landfill” on Earth is actually in the North Pacific Ocean. The “Great Pacific Garbage Patch” is estimated to be anywhere from 3,100 square miles to twice the size of Texas.

You may be wondering how garbage dumped on land can make it to the ocean. Well, first of all, some garbage is directly dumped into the ocean. Secondly, as Scripps Institution marine biologist Miriam Goldstein puts it, “the ocean is downhill from everywhere;” if someone in Iowa throws a bottle into a river, it will eventually end up in the ocean. Finally, about 20 percent of the debris in the garbage patch comes from sea-going vessels and oil platforms.

The garbage patch forms in the North Pacific gyre, one of five main ocean gyres worldwide: North Pacific, South Pacific, North Atlantic, South Atlantic and Indian Ocean. These gyres are created when the jet stream goes one way and the trade winds go the opposite way – creating a huge, gently swirling circle. On the outside of the circle, the currents move around, but the inside remains calm, making it the perfect place for debris to accumulate.

In the case of the North Pacific gyre, pretty much everything that falls off the west coast of North America and the east coast of Asia will most likely end up in there. While the North Pacific garbage patch is the largest, each of the five gyres has its own accumulation. In fact, the trash from all five gyres put together covers 40 percent of the world’s oceans.

So what exactly are these oceanic garbage patches? Well, first let’s be clear as to what they’re not. Contrary to popular myth they are NOT huge floating trash islands. The patches are made up of millions of small and microscopic pieces of plastic. The patches won’t show up on satellite and if you were to take a boat through them, you might not even necessarily notice the plastic floating in them. So does that mean we don’t need to be concerned? Nope. The fact that the debris is so small means that cleanup is nearly impossible. As Goldstein explains, you’d basically have to clear-cut the upper layer of the ocean to remove it all.

So the pieces are too small to easily clean up – that might make it seem as though they’re too small to do much damage, but that’s far from correct. Some of the plastic remains in large chunks and many animals and birds become entangled in them and die every year.

The plastic pellets are small enough that birds and fish mistake them for food. This is especially disastrous for birds – the plastic stays in their stomachs, keeping them from eating anything with nutritional value and causing them to slowly starve to death. For fish, whose digestive systems are much different, the effect of eating the plastic may not be so catastrophic, but scientists are still trying to understand the extent to which ingesting these plastic pellets is effecting marine life, but for some, like the albatross below, the deadly effects are clear.

Some creatures have actually been granted a boon by this massive plastic soup, but don’t feel too cheerful about that. The plastic has created a surface for small creatures like water insects, barnacles, small crustaceans and invertebrates called bryozoans. These creatures would normally not make it to the middle of the ocean, so their presence will change the ocean’s ecosystem. Especially in the case of barnacles and bryozoans – they have caused considerable damage to other ecosystems they’ve invaded.

And it’s not just about ecosystems in the middle of the ocean – the surface the plastic provides could enable these creatures to travel to places they’ve never been before, for example, their introduction to the Pacific Northwest islands’ coral reefs could be a real problem.  So what can be done? The most important thing is for people to be aware. As biologist Goldstein puts it, “It really is an issue that effects everybody, but that’s great because that means that everybody can help.”

Using fewer plastic products would help, as would more recycling of what we already use. There are also scientists who are working to make plastic products from renewable products. According the Science channel, starches, cellulose, soy protein, vegetable oil, triglycerides and bacterial polyesters all contain polymers that can be processed to produce biodegradable plastics.

Even so, reducing the amount of new plastic dumped into the ocean won’t get rid of what’s already there. For that monumental task, The Ocean Cleanup – a group of oceanographers, marine biologists, recycling experts and engineers — is raising money through crowd funding to launch a massive cleanup effort.

How about some plastic with your sand? | Waterways

Parts cleaning: as clean as necessary, as efficient as possible

Author plasticsinfomart 87
Holt Heath — More than a quarter of a million tonnes of post-consumer PVC-U were recycled in Europe last year through Recovinyl, the PVC...
Read More