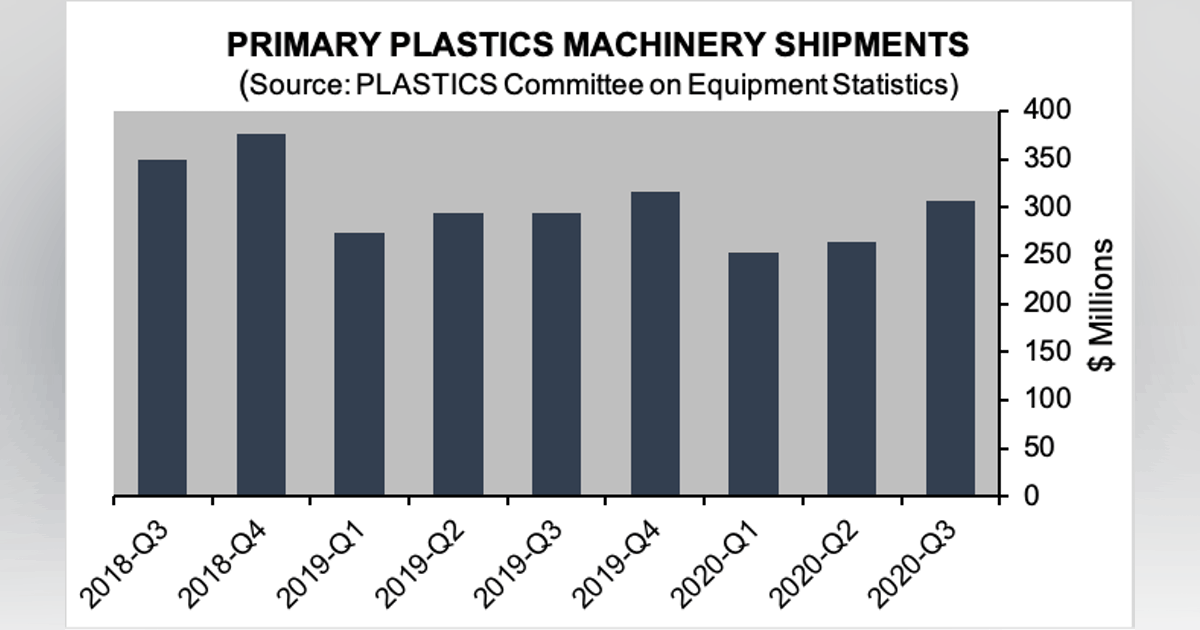 (PLASTICS) today announced that shipments of primary plastics machinery (injection molding and extrusion) in North America increased in the third quarter according to the statistics compiled and reported by PLASTICS’
Committee on Equipment Statistics (CES).
The preliminary estimate of shipment value from reporting companies totaled $333.8 million in the third quarter. It increased 4.0% from the previous quarter and 8.8% from a year earlier. The value of shipments of twin-screw
extruders rose significantly by 44.4% in the third quarter and was 61.2% above the third quarter last year. In the third quarter, shipments of single-screw extruders rose by 7.2% from the previous quarter and 15.9%
from the third quarter last year. Injection molding shipments edged up 1.6% from the second quarter and 5.7% from a year earlier.
Plastics equipment shipments picked up in the third quarter as the economy continue to emerge from the pandemic. Moreover, the increase in shipments was consistent with higher plastics production, which in the third quarter rose 4.2% or 5.9% from a year earlier. The upward-sloping demand for plastics equipment has not changed,”* *according to Perc Pineda
The CES also conducts a quarterly survey of plastics machinery suppliers that asks about present market conditions and expectations for the future. In the third quarter survey, 75.5% of respondents expect market conditions
to either improve or hold steady in the coming quarter – lower than the 92.7% of respondents who expressed the same view in the second quarter’s  survey. As for the next 12 months, 75.0% expect market conditions to be
steady-to-better. This is lower than the 78.7% of respondents in the previous quarter’s survey who were expecting growth in the next 12 months.
While the survey results show that growth expectations have moderated it also reveals that plastics machinery suppliers remain optimistic about market conditions four quarters ahead,”* *said Pineda.
Plastics machinery exports increased by 6.1% to $390.2 million from the second quarter. Mexico and Canada remained the top export markets of plastics machinery from the U.S. The combined exports to USMCA partners in
the third quarter totaled $172.6 million, which was 44.2% of total plastics machinery exports. Imports fell by 3.0% to $848.4 million resulting in a $458.3 million trade deficit. The U.S. plastics machinery trade deficit
decreased by 9.6% in the third quarter. U.S. trade data in the third quarter are in sync with the improving global trade outlook. The World Trade Organization now expects a 10.8% increase in global merchandise trade this year—an upward revision from its 8.4% projection in March.
Data we’re seeing at PLASTICS confirm our prior projections that the outlook for plastics machinery in the second half of 2021 is positive albeit shipments will continue to fluctuate. The likelihood that supply-chain issues will continue to be a headwind in 2022 remains high. The globe is still emerging from the pandemic,”* *said Pineda.
The globe is still emerging from the pandemic,”* *said Pineda.
About Plastics Industry Association
The Plastics Industry Association (PLASTICS) is the only organization that supports the entire plastics supply chain, representing nearly one million workers in the $395 billion U.S. industry. Since 1937, PLASTICS has been
working to make its members and the industry more globally competitive while advancing recycling and sustainability. To learn more about PLASTICS’ education initiatives, industry-leading insights and events, networking opportunities and policy advocacy and the largest plastics trade show in the Americas, *NPE: The Plastics Show*
Preview post

Perstorp signs Memorandum of Understanding at “Make in India”

Author plasticsinfomart 124
Holt Heath — More than a quarter of a million tonnes of post-consumer PVC-U were recycled in Europe last year through Recovinyl, the PVC...
Read More