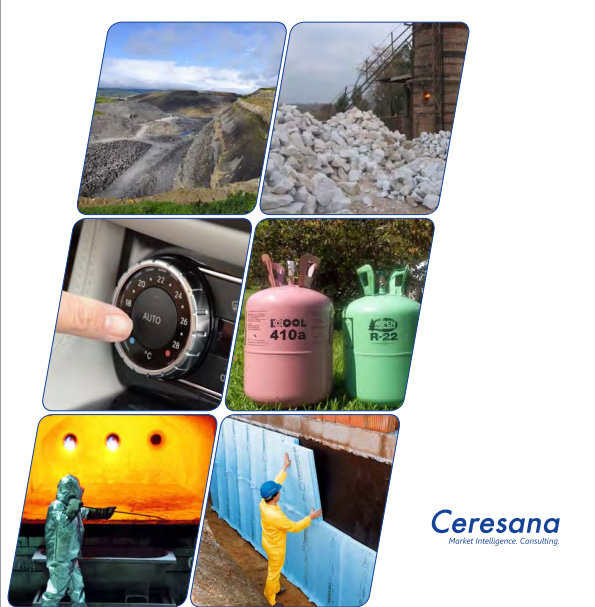 Fluorochemicals can be found almost everywhere: in refrigerators and pharma-ceutical drugs, in crop protection and paints, in clothes as well as in fuel cells. They are also used in the production of aluminum, insulation material, lubricants, anticorrosives, semiconductor chips and innumerable other products. The market research institute Ceresana has now published the worldwide first study that provides a complete overview of this key sector of the chemical industry: from feedstocks to demand in individual applications. Ceresana forecasts the value of the global market for fluorochemicals to increase to approx. US$5 billion until 2021.

Fluorite Mainly Mined in China
Main raw material in the production of fluorine and other fluorochemicals is the mineral fluorite (CaF2), which is also known as calcium fluoride or fluorspar. More than half of the fluorite mined worldwide comes from China – and is mainly used to satisfy domestic demand. Other large-scale miners of various fluorites of high calcium fluoride content are Mexico and Mongolia. The USA can produce fluorine as by-product of the mining of phosphate, but also import large quantities of fluorite and hydrofluoric acid, especially from Mexico. Japan, on the other hand, does not possess fluorine bearing rock and satisfies its high domestic demand by imports, mainly from Mongolia.

Asia Consumes Largest Amount of Fluorochemicals
Demand for hydrofluoric acid and fluorochemicals is particularly high in Asia-Pacific. This region’s share of global consumption will rise to considerably more than 50% until 2021. The majority is accounted for by China, the major economic power in this region. Ceresana forecasts an increase of demand exceeding 5% p.a. until 2021 for India, which will thus outperform even China. However, absolute demand in India continues at a much lower level than in China.

What Happens After the Prohibition of HCFC?
International environmental protection agreements also affect fluorochemicals: the Montreal Protocol on substances degrading the ozone layer, the Kyoto Protocol on the reduction of greenhouse gas emissions and an EU regulation on certain fluorinated greenhouse gases. The prohibition of hydrochlorofluorocarbons forces manufacturers and consumers to switch to alternatives. Hydrofluorocarbons such as R134a are thus becoming increasingly important. As hydrofluorocarbons, however, act as greenhouse gases, they are to be replaced by other substances on the long term. Possible alternatives are hydrofluoroolefins, which are, however, highly flammable and have not yet been researched completely. Other alternatives, depending on the application in question, include non-fluoric substances such as carbon dioxide, butane, propane or ammonia.

Refrigerants and Blowing Agents Largest Growth Markets
Fluorochemicals are mainly used as refrigerants. Demand in is increasing in Asia-Pacific in particular, where the general diet is changing due to a rise of prosperity and a higher meat consumption is increasing demand for refrigerators. Also, the number of air conditions in vehicles and buildings is rising. However, China mainly utilizes fluorochemicals in the production of aluminum so far. Another growth market for fluorochemicals is the manufacturing of building materials: As energy efficiency becomes more and more important in the construction sector, demand for blowing agents in the foaming of plastics such as polyurethane (PUR) and extruded polystyrene foams (XPS), used for building insulation, increases. Demand for fluorochemicals in this segment is likely to increase by almost 5% p.a. until 2021.

The Study in Brief:
Chapter 1 covers demand for and production of acid and smelting grade fluorite. A detailed overview is given for individual countries. Also, revenue figures are provided for each region. Analyses cover the years 2005 to 2013 and forecast the 2014 to 2021 period, split by the six world regions Western and Eastern Europe, North and South America, Asia-Pacific, and the Middle East/ Africa.

Chapter 2 provides a presentation and analysis of the global market for hydrofluoric acid – including forecasts up to 2021: for the world and each region, demand and revenues will be explained. This chapter also covers various product types such as hydrochlorofluorocarbons, fluorocarbons, fluoropolymers as well as other and inorganic fluorochemicals.

Demand for and revenues generated with hydrofluoric acid in the 14 most important countries is analyzed in great detail in chapter 3, as is demand in the applications production of aluminum, refrigerants, blowing agents, and other applications.

About Ceresana:
Ceresana is a leading international market research and consultancy company for the industrial sector and operates branch offices in Constance, Vienna and Hong Kong. For more than 10 years, it has been supplying several thousand customers from 55 countries with up-to-date market intelligence. Extensive market knowledge creates new prospects for strategic and operational decisions.

More about Ceresana at www.ceresana.com/en