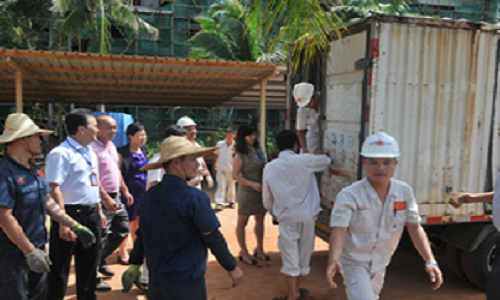 Super Typhoon Rammasun, the most powerful typhoon that has landed in China in four decades, has left parts of South China devastated, and the local residents and businesses are still struggling.

Communication with the outside world is off and on, he added, and the Hainan Plastics Industry Association is in the process of evaluating the damage.

Haikou-based automaker FAW Haima Automobile Co. Ltd. said the typhoon has damaged some of its factory roofs, production machinery, finished vehicles and parts inventories.The automaker said its headquarters factory has been shut down since July 18 and does not expect to resume normal production until half a month from now.

Based on government data by July 20, the total affected population in Hainan, Guangdong and Guangxi exceeded 7 million, along with 37,000 houses flattened and infrastructure severely damaged.

The situation initially did not receive much attention from China’s national media — now widely criticized for devoting too much time and coverage to news of a July 17 Malaysia Airlines jet crash in Ukraine — until days after. In the meantime, some areas of South China struggled without water supply and power for days.

Before heading to China, the super typhoon also struck other Asian countries and was reported to have caused severe damage in the Philippines and Vietnam.