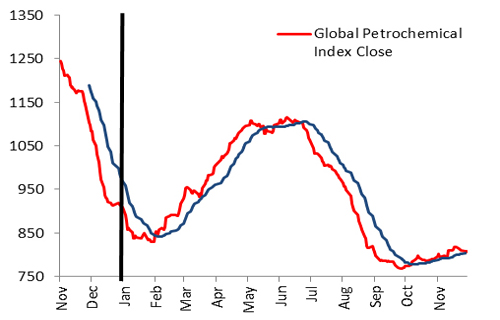 Prices in the global petrochemicals market in December, expressed as a monthly average, were US$796 per metric ton (/mt), down 1.1% or US$9 per mt, from November’s average, according to the just-released monthly Platts Global Petrochemical Index (PGPI).

Prices also closed the month on a low note, with an end-of-month closing physical price that was 1.75% lower than the end-of-month price in November. This is a reverse in trend from the previous two months, when markets showed consecutive gains.

“The primary olefins of ethylene and propylene both showed slight gains, while aromatics softened in December, comparing month to month values,” said Hetain Mistry, Managing Analyst for petrochemicals at Platts. “Ethylene was marginally higher, by 0.20% and propylene was 1.4% higher, both remaining steady on tight supply, especially in Asia. In terms of aromatics, benzene and paraxylene saw the biggest shift downwards, with values down 5% for both, following upstream energy trends, as both crude and naphtha posted losses in December.”

Polyethylene (PE) and polypropylene (PP), plastics manufactured from ethylene and propylene respectively, were both down in December as each derivative reversed the trend observed in the feedstock price. Global PE prices were down 1% to US$1,235/mt, while PP prices fell 0.6% to US$1,098/mt.

Petrochemical prices largely moved in line with global equity markets in December, lower across the board. The Dow Jones Industrial Average declined 2.6%, while The London Stock Exchange Index (FTSE) was down 1.8%. The NIKKEI 225 was down 3.6%.

PGPI is a benchmark basket of seven widely used petrochemicals – ethylene, propylene, benzene, toluene, paraxylene, low density polyethylene (LDPE) and PP as published by Platts and is weighted by the three regions of Asia, Europe and the US.