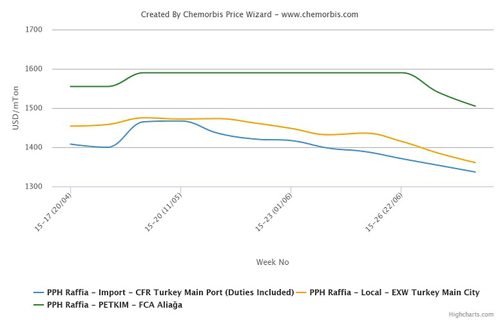 Petoskey Plastics has announced it will expand its Hartford City, Indiana, plant in response to what it calls growth in its recycling services and product lines.

FORT WAYNE : Petoskey Plastics has announced it will expand its Hartford City, Indiana, plant in response to what it calls growth in its recycling services and product lines. The latest expansion includes a $5.4 million investment in building improvements and additional equipment, assisted by a 10-year tax abatement approved by the Hartford City Council.

The expansion involves the refurbishing of vacant buildings on the plant property to add one extrusion line and space for storage and sorting capacity for post-consumer materials diverted to Petoskey’s recycling operation. Petoskey says it also will make improvements to existing lines that manufacture products using post-consumer recycled resin. The company buys and reprocesses pallet wrap, stretch films and plastic shopping bags.

“Growth in recycling and green products remains strong, and this expansion enhances our capacity to meet that demand,” says Petoskey Plastics President Paul Keiswetter. “One of the things that weighed on our decision to purchase the Hartford City facility in 2007 was the potential for ongoing expansion. Now, with higher volumes of post-consumer plastic flowing from major national retailers and other sources, that decision is paying off.”

Keiswetter cited growing awareness of the environmental benefits of using postconsumer plastic in manufacturing blown plastic film products as a major contributor to the company’s success. He says a recent study concluded that products manufactured from virgin polyethylene produce five and a half times more carbon dioxide (CO2) than those made from post-consumer plastic.

This is the third major expansion at the Hartford City facility since Petoskey began operations there in 2008. The company recycles approximately 10,000 tons of post-consumer plastic annually, converting the material into GreenPE® resin used in the production of plastic film and bag products, some of which contain up to 70 percent recycled plastic. Many of Petoskey’s customers participate in the company’s recycling program and then in turn purchase products made from their own recycled plastic.

“Petoskey Plastics is a key employer in Blackford County and we are pleased to support its continued investment in Hartford City,” says Hartford City Mayor Ben Hodgin. Six new jobs are expected to be created when the expansion is completed next year. The company currently employs approximately 115 people at the Indiana plant.