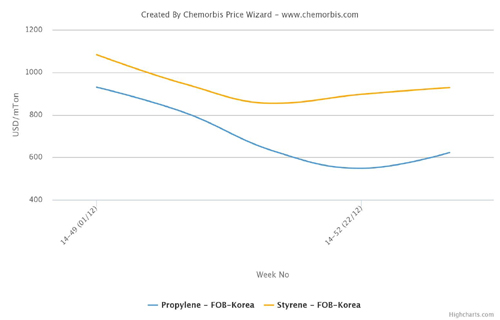 Players in India report that PVC demand has shown some signs of cooling down this week following several weeks of strong activity, according to ChemOrbis. Buyers in the country are reported to have covered their needs in the past few weeks and are now said to be more cautious in their purchasing. In addition, the renewed competitiveness of acetylene based PVC has prompted some players to comment that conventional PVC producers will need to moderate their offer levels in order to maintain their competitiveness relative to acetylene based cargoes. A source at a Chinese acetylene based PVC producer stated that the volume of exports to India recently has grown large enough to create some supply shortages in China’s Xinjiang province.

A compounder who reported purchasing Taiwanese and South Korean PVC stated, “We received offers for Japanese PVC as well, but we found them to be less competitive than the offers we received for Taiwanese and South Korean origins, which leads us to predict that Japanese sellers will step back on their prices soon. The monsoon season will start soon and this has lead to some hesitancy to purchase on the part of buyers, who prefer to source prompt cargoes now. We think that prices will retreat a bit from their current levels in the coming weeks.” A trader who reported selling out their allocation for South Korean PVC added, “Most of our customers claim to be covered and are scaling back their purchases, which has lead to a bit of a slowdown in market activity. We think that sellers may need to step back on their prices in the coming weeks.”

According to ChemOrbis, another trader reported that their South Korean supplier stepped back on their prices as their initial levels had met resistance after they had announced slightly above the new price level of a Taiwanese major. “Our supplier’s offers are more attractive now, but we are not planning to purchase as we are currently undergoing year-end bookkeeping as our fiscal year ends in March. We will return to the market in April, when we expect to see a bit of a slowdown in demand compared with March,” the trader stated. A third trader commented, “Demand is slowing down as most buyers are feeling satisfied with their stock levels. Many Indian companies conclude their fiscal year in March and this is also contributing to the slowdown in market activity.” A distributor added, “Local prices are more competitive than imports these days. We hear that a large volume of import PVC cargoes will reach the ports by the end of this month, which should put some additional pressure on import prices.”