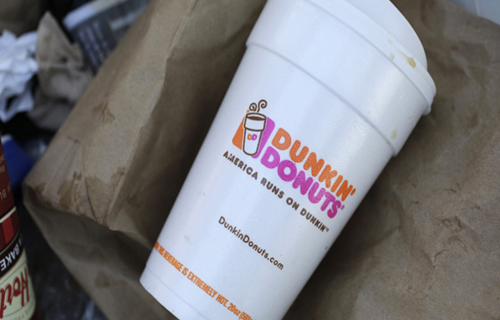 BOSTON (Scrap Monster): Dunkin’ Donuts has temporarily suspended its in-store EPS recycling program. The company’s plans to explore alternatives to foam-cups, low usage of the program and certain issues related to contamination are being cited as the reasons for the decision.

Meanwhile, the company also announced that own single-stream recycling program is under development phase, which is expected to be launched across company stores in 2015 itself. Dunkin’ Donuts has already idled all recycling units from its restaurants.

The company had initially launched the EPS recycling program in 2013 at five Massachusetts restaurants. The program was later extended to almost double dozen company locations across the state. Dunkin’ Donuts had aimed to achieve at least 5% recycling rate at company-owned locations by 2015. However, the program turned out to be unsuccessful as participation in the program was minimal because bulk of the business constituted take-away orders. In addition, the collected cups were commingled with food waste, which made it unsuitable for recycling.

According to the recently released sustainability report, the company’s efforts to develop a widely-recyclable material in place of the existing foam-cups are in progress. Although, the company has been unable to roll out the new product in 2014 as promised earlier, it is hopeful that the new product could be launched by end-2015.

The new PP cup developed in collaboration with Indiana-based Berry Plastics had faced criticism from customers, as its lid was unacceptable to many municipal recycling programs. The report states that new recyclable lid will be launched in the next 12-18 months on trial basis.