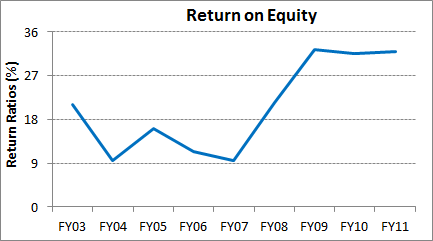 Switzerland-based chemicals company Clariant announced its full year sales 2012 from continuing operations was CHF 6.038 billion, an 8% increase compared to CHF 5.571 billion in the previous year period.According to its statement, the 8% increase was driven by the acquisition of Süd-Chemie, while organic growth was flat with 2% higher prices offsetting lower volumes.

“Clariant achieved solid results in a demanding year, with the majority of businesses performing well. In most regions the company continued on a robust growth path. In Europe, the economic weakness affected some of the more cyclical businesses. Concerning the repositioning of Clariant, the company has made good progress. Five businesses have been reclassified as discontinued operations and an agreement to divest three of those businesses has already been signed.” CEO Hariolf Kottmann says.

“The focus in 2013 will now be on growing the remaining seven core businesses. Combined with continuous cost efficiency, the reshaped Clariant is well positioned to achieve its 2015 targets.”Sales development in 2012 was heterogeneous across all regions and businesses. From a regional perspective, all regions except Europe grew double-digit. Europe declined 2% while growth dynamics in Asia/Pacific remained robust during the year. The pronounced weakness in southern Europe has spread across the continent in the second half-year.

However, with roughly two thirds of sales generated outside of Europe, the impact of the European crisis was offset by growth in the other regions, says the company. In the fourth quarter no further deterioration of the business environment from third quarter levels has been observed.For 2013, Clariant expects a persisting soft macroeconomic environment characterized by high volatility. While solid growth in the emerging markets is most likely, no significant growth impulses are expected from the European and the North American economies.For the mid-term, Clariant confirms its 2015 targets of an EBITDA margin of above 17% and a return on invested capital (ROIC) above peer group average.