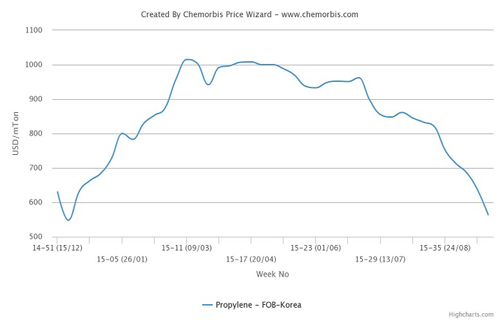 Spot propylene prices in the Asian market saw further decreases after the middle of last week, according to traders in the region. This decline brought prices to their lowest level of 2015 based on the average weekly spot price on FOB South Korea basis. Spot propylene prices are nearly back to the levels seen in December 2014 as highlighted on the ChemOrbis Price Wizard graph below.

The sinking market level is attributed to weak demand and oversupply concerns. Buyers reportedly secured their needs last week and then withdrew ahead of upcoming holidays. China will celebrate a week long National Day holiday from October 1-7, which is exacerbating already slow market conditions. South Korea will also celebrate its Mid-Autumn Festival from Sept 26 – 29.

Players noted that China imported around 14% less propylene in August of this year compared to last year. Concerns of oversupply reportedly led Formosa to reduce operating rates at its three crackers to 95% to alleviate some of the supply.

As reported on www.ChemOrbis.com,the decline in the spot propylene market parallels the trend seen in China’s downstream PP market where oversupply continues to be a downward pressure point on prices. A trader commented last week, “More coal based PP units are coming on-stream and this is keeping supply levels sufficient. We are taking a wait and see stance for now as demand is not very active.”