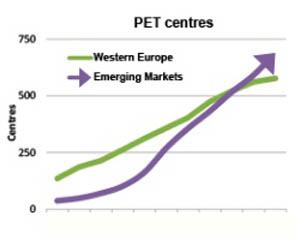 PET prices remain firm across Europe this week, supported by higher upstream costs as per the pricing service of ChemOrbis. PX contracts for June started settling with increases of €30/ton from May while discussions for MEG contracts are underway. In addition to higher costs, improved demand was cited as another reason behind sellers’ firmer stance. Many buyers turned to the local market due to late delivery dates for imports.

A South European producer started giving June offers with increases of €30/ton in Italy in line with higher costs. “Demand is quite good and we are seeking to recover our margins. We are confident about achieving our hike targets this month while the market may stabilize in July,” a producer source commented.

A converter in Italy reported receiving new offers for South European PET with increases of €20/ton from last month and added that he is yet to make new purchases as he is covered for now. The buyer was also offered South Korean import PET for August delivery, but he didn’t accept these offers citing the firm parity. The euro/dollar parity inched up again after hitting a four month low following the European Central Bank’s rate cut. A packaging producer also confirmed receiving higher local offers for June, commenting, “Demand is good, but we are planning to wait before making new purchases as we have sufficient stocks for this month given our en-route material. We think that the market may change direction in July.” Following the recent hikes, local PET prices in Italy have reached the highest level since March of this year.

The Northwest European PET market is also seen tracking a firmer trend this month. A distributor in Germany raised their June prices for West European PET by €20/ton and reported seeing stable demand. According to the seller, however, European producers are under pressure from ample import availability. Another German distributor elected to issue smaller increases of €10/ton from May. “Demand is slower compared to the same period of last year due to an oversupply issue led by new capacities,” he commented.

A packaging producer received new offers for June gentlemen’s agreements €10-20/ton above last month. He reported, “We are targeting to pay increases of €10/ton at most. Availability is limited these days, but some new capacities will come online soon. We aren’t planning to buy import cargoes as their delivery is slated for August. Our end product demand is picking up in line with warmer weather conditions.”

In production news, Thailand’s Indorama was expected to conduct a six-week long maintenance shutdown at their 153,000 tons/year PET plant in Wloclawek, Poland between May and June. Although the producer’s shutdown caused reports of reduced availability among some players, new capacities which are set to come online are likely to offset any supply concerns.

Author plasticsinfomart 126
The Coca-Cola Company announced today in the United States the introduction of a new 13.2oz bottle made from 100% recycled plastic material (rPET)*. This...
Read More