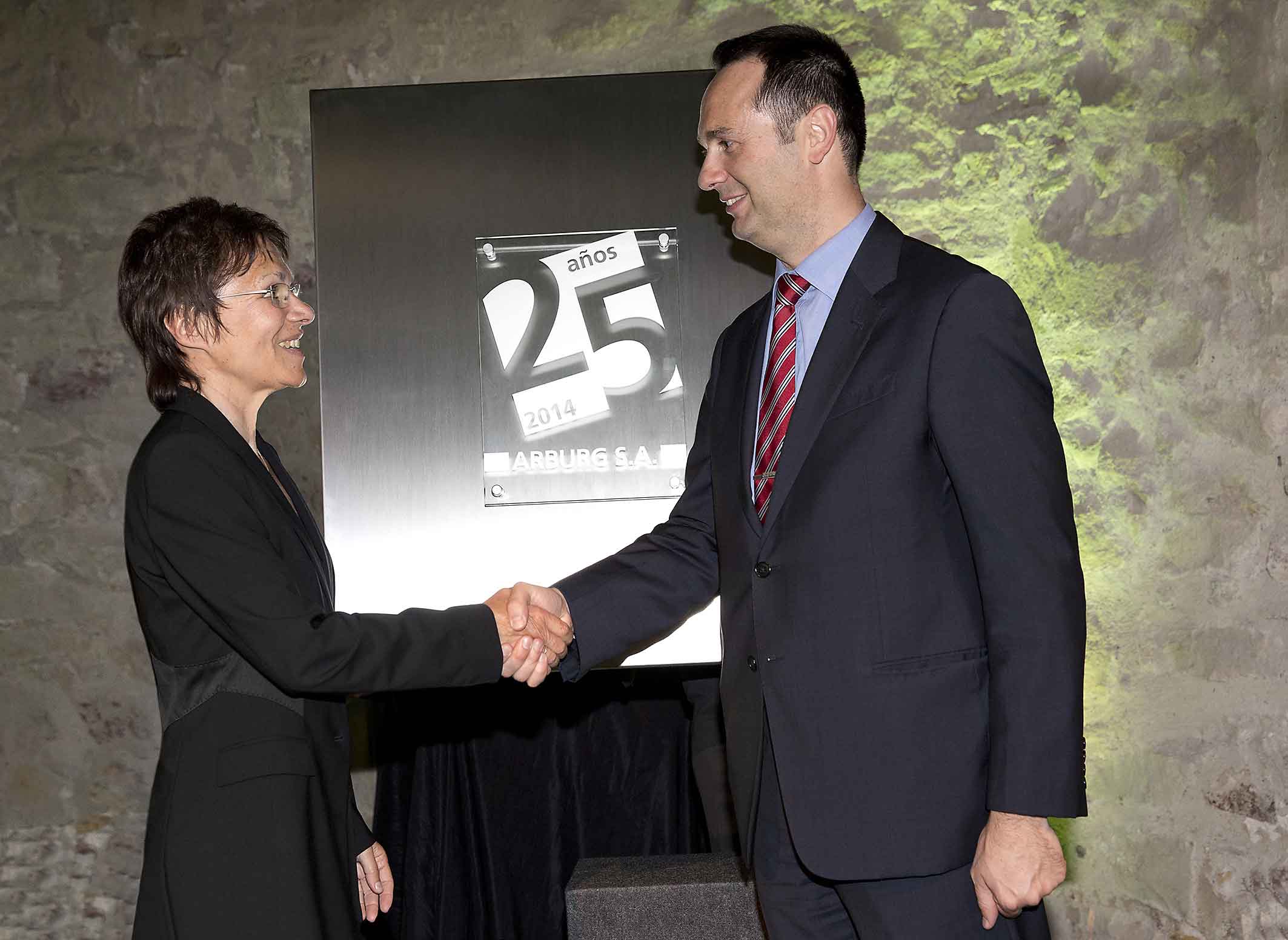 Lossburg. On 5 June 2014, Arburg celebrated the 25th anniversary of its Spanish subsidiary with around 70 guests. One day later, around 90 customers took advantage of the opportunity to find out about medical technology and LSR processing at an open house event in Sabadell. During the anniversary celebration, Arburg Managing Partner Renate Keinath presented subsidiary manager Martín Cayre with a commemorative sculpture as a mark of recognition for 25 years of successful work on the Iberian Peninsula.

In keeping with the special occasion, the anniversary celebration was held in the chapel of Barcelona’s Museum of Contemporary Art (MACBA). The around 70 guests included customers from Spain and Portugal as well as a high-profile delegation from the German Arburg headquarters, including Managing Partner Renate Keinath and European Sales Director Stephan Doehler.

Thanks extended to customers from Spain and Portugal
In her speech, Renate Keinath commented as follows: “The fact that we can celebrate our silver anniversary is thanks to our dedicated team and our customers. Without them, we would not be what we are today: one of the market leaders in Spain and Portugal.” In the name of the entire Arburg organisation, she expressed her thanks to the customers for the trust they place in Arburg and for the successful cooperation over the past decades. “It confirms to us that we adopted the right path 25 years ago and that our ongoing investments on the Iberian market have been worthwhile.” During her speech, she took stock of the milestones and the successful development of the subsidiary, which Martín Cayre has managed since 2007.

Active in Spain since 1962
The activities in Spain began with delivery of the first injection moulding machines back in 1962. In 1989, Arburg then founded its own subsidiary in order to provide comprehensive support to the local customers. Sabadell was selected as the location because most of the country’s injection moulding companies were based in Barcelona or within Catalonia, due to the good infrastructure there and because the region, even then, represented the largest and most important market.

Two locations, in Madrid and Barcelona
In the early 1990s, the Spanish market grew and Arburg received an increasing number of enquiries from central Spain. In 1997, Arburg S.A. additionally took on the task of supporting the customers in Portugal. In 1998, the subsidiary’s headquarters was then moved to Arganda del Rey/Madrid, as the central location of the Spanish capital made it easier to support the entire region. In 2008, there followed a move into a larger, more modern building. This opened up new opportunities to extend the range of training courses and open house events.

The location in Sabadell remained in operation because Catalonia is still the largest regional market for injection moulding machines in Spain and this enabled the subsidiary to maintain its close relations with many important customers.

With the Arburg Technology Centres in Madrid and Barcelona, the company is extremely well positioned today. The centrepiece of both locations is a showroom in which the Allrounders are not only presented, but can also be used for customer tests, for example. Furthermore, facilities for the spare part service, customer service and customer training are also available here.

Professional support provided with 25 employees
The successful development of the Spanish Arburg subsidiary is reflected by the staffing levels. Twenty five years ago, operations began with a staff of eight. Today, the team in Madrid and Barcelona counts a total of 25 employees. Thanks to eleven years of service to the company on average, they enjoy comprehensive expertise, from which the customers benefit. The best possible on-site support is ensured by 14 service technicians alone.

Open house with around 90 customers in Sabadell
An important aspect of the intensive customer support activities in Spain are open house events, which are held on a regular basis on a variety of focus topics. On the occasion of the anniversary, an open house event attended by around 90 customers was held in Sabadell on 6 June 2014. The focus here was on the topics of medical technology and the processing of liquid silicone (LSR). These were presented jointly with the partners Rico (LSR mould technology) and Alpha Ionstatex (clean room technology) in order to cover the entire spectrum. The representatives from the Arburg headquarters in Germany also included the medical technology experts Alexander Göhring, Sales, and Sven Kitzlinger, Applications Technology Consulting. In addition to the expert presentations by Arburg, Rico and Alpha Ionstatex, which covered the focus topics in detail, an exhibit also demonstrated an efficient production solution: an electric Allrounder from the Edrive series produced optical magnifying glasses made of LSR.

Products to suit the market
A further success factor according to Martín Cayre is Arburg’s extensive product range: “This puts us in a position to supply high-end solutions to industries such as packaging and medical technology. Every third machine on the market is electrically driven and every third machine is also equipped with one of our integrated Multilift robotic systems. This means that our customers can fully meet their needs in terms of precision, productivity and automation. Thanks to the consistent development activities and intensive customer support, Arburg has established a competitive edge in Spain over the past 25 years. And our operations are designed to do so in the coming 25 years as well.”

Global Plastic Packaging Materials and Products Market to Reach US$262.6 Billion by 2015…