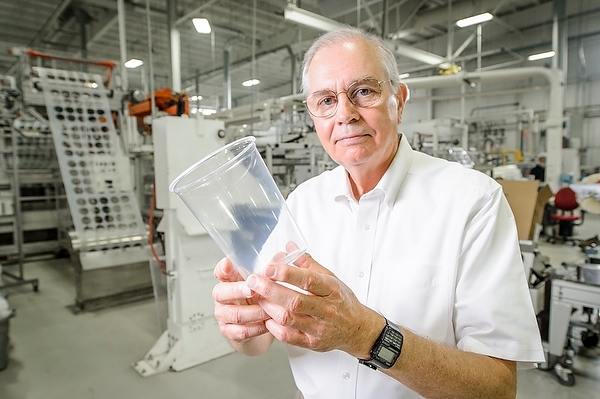 “The Graduate” is a running joke in the plastics industry . In that 1967 Dustin Hoffman movie, a character famously — and accurately — summarized the future in one word: “Plastics .”

The movie may have been influential, but Tom Mohs, founder of the Madison plastics manufacturer Placon, says he owes nothing to it. “I was already buying my second thermoforming machine when the movie came out,” says Mohs. “No, I owe it to Ron Daggett.”

Madison native Ronald Daggett (1915-2004) was a Renaissance man who taught the world’s first engineering plastics class at the University of Wisconsin-Madison in 1946. Mohs, who had taken Daggett’s courses while at the UW, says Daggett was the first person he contacted when entering the industry  in 1966. “I decided to do some design work, and Ron offered the use of equipment and machine tools in his basement. He was very kind, helpful, continued to teach me what I needed to know.”

In addition to its main plant on McKee Road in Madison, Placon also has manufacturing in Indiana and Massachusetts. All told, 600 Placon employees make packaging for customers in food, retail and medical industries.

Other Wisconsin companies have also benefited from Daggett’s expertise and encouragement. Former student Robert Cervenka founded what may be the state’s largest plastics firm — Phillips Plastics, now called Phillips-Medisize — in 1964.

Although the Wisconsin plastics industry employed an estimated 35,000 people in 2011 — making it the eighth-largest plastics industry in the nation — the landscape was quite different when Daggett started teaching at the UW. At the time, plastics was a trial-and-error industry, says Tim Osswald, a professor of mechanical engineering who teaches courses on plastics that originated in “Plastics and Plastic Processing ,” the course first taught by Daggett in 1946.

Born in 1915, Daggett attained two mechanical engineering degrees (BS 1938; MS 1939) from the UW and then engineered plastics for RCA during World War II. When he came back to Madison and joined the faculty, according to Osswald, “there was this new material, but nobody knew anything about it, so (Daggett) thought, ‘I went through this learning process at RCA; there’s got to be a course taught.’ He wanted the course to focus on manufacturing, on strength and creep — all the strange things about plastic that people did not understand at the time. There was not even a textbook.”

Anybody who remembers plastic parts from before, say, 1970 may remember them as crude, ugly and fragile. Today, plastic can be tough, resilient and attractive, and courtesy of new formulas and processes, the material continues to encroach on wood and metal. Indeed, plastic has emerged from the shadow of other materials : Many plastic parts could not be made from anything else.

Osswald says much of the credit for the stream of innovations in plastics is owed to the scientific approach started by Daggett and former UW chemist John Ferry, Daggett’s colleague. “Ferry was the father of polymer physics. So, 200 meters apart from each other, we had the mold maker in mechanical engineering and this polymer physicist in chemistry, who understood the molecular structure of the material. It wasn’t until those two came together after 1955 that people in the industry could push their material to the limit.”

But to focus exclusively on plastics would be to miss much that is fascinating about Daggett, the engineer who played violin, made furniture, painted beautiful yet structurally accurate water colors, lettered calligraphy, photographed flowers and started a business long before he retired from the UW in 1975.

“He was the Renaissance man of Madison,” says his daughter, Karen Wertymer. “He could do anything. People brought their broken goods to our basement. Whether it required metalwork, woodwork or plastics fabrication, in short order it would come back fixed.”

John Wertymer says his father-in-law “embodied the Wisconsin Idea, that the university should not be an ivory tower but should serve all the people of the state. There wasn’t anything he wouldn’t attempt. He would never turn away anyone who asked for help.”

Daggett, Osswald recalls, encouraged students like Mohs. “When Tom Mohs … had an idea for the blister pack, no one wanted to make it. He talked to Daggett, who said, ‘Just start your own company.’ So (Mohs) started Placon, and now it’s one of the 20 largest thermoforming companies in the United States and Canada.”

Mohs remembers Daggett as an introvert. “I did not find him easy to talk to as a student, but his course was perfect for what I was looking for. It was not highly technical; it was a survey that talked about the fundamentals of various plastics processing equipment and various kinds of plastics, the differences between polyethylene, polypropylene, ABS, styrene.”

Long before he retired, Daggett was designing parts for manufacturers, and eventually, he decided to move out of his basement to gain credibility with customers. In 1963, he started Engineering Industries in Verona, and Rayovac became a major customer.

Dean VandeBerg, who’s now president of the company, walked in as a summer intern in 1978 and never left. He says that Daggett specialized in the hard jobs. “Ron would not take just anything that came along; he liked to work on parts that required a little more engineering and development work. He loved helping the customer design .”

VandeBerg notes that Daggett put his considerable drawing talent to work, saying, “I would watch him work with customers, getting their thoughts, and he would be drawing the part as they talked. I learned an awful lot from him; he was my mentor. That’s not debatable.”

That emphasis on solving hard challenges “remains a strong suit and laid the foundation for who we are as a company,” VandeBerg says. Engineering Industries employs about 80 people, including five mechanical engineers educated in Madison.

After working with Daggett for more than 22 years, VandeBerg remembers a man who rarely got angry. “He was an even-keeled kind of guy, not a gregarious backslapper — he was more reserved. He looked pretty average; from looking, you would not realize all that going on there.”

Daggett’s most successful student was probably Robert Cervenka, who graduated from the UW in 1958 and founded Phillips Plastics in 1964. His wife, Debra, says that only aerospace and plastics industries were hiring around that time. “Bob had no desire to work in aerospace on the West Coast so he looked for jobs in the plastics industry, specifically injection molding . He was hired by Modern Plastics … out of college as a result of (Daggett’s) course.”

According to Debra Cervenka, who served as executive vice president of Phillips Plastics until the Cervenkas sold it in 2010, “Bob fondly credits professor Daggett for inspiring him to go into a new direction and new field as opposed to becoming a designer for the automotive industry.”

Today, Phillips Plastics, now called Phillips-Medisize, focuses on pharmaceutical packaging and sophisticated medical devices, such as insulin pumps and surgical instruments. It has more than 3,100 total employees at six locations in Wisconsin and in California, Europe, Mexico and China.

In 2010, to recognize the UW’s role in their success, the Cervenkas donated $1.5 million to the university to fund advanced equipment in the undergraduate teaching labs. “We both feel very connected to what it takes to run a successful company, technologically,” Debra Cervenka says. “Madison is one of the foremost schools of engineering in the country, and they’re doing unbelievably good work on basically a shoestring.”

Osswald notes that a company like Phillips-Medisize, which makes products that did not exist a decade or two ago, shows how the plastics industry has continued to expand and innovate.

Although a primitive plastics industry existed before Daggett started teaching, “he was present at the creation,” according to Osswald. “He got it all going. That was the first course in plastics taught in an engineering college anywhere in the world. Wisconsin was the birthplace; the pioneers in understanding plastics were here, and that’s why it’s no coincidence that such a small state has such a huge plastics industry.”

Yet, one wonders how Daggett would take the attention merited by his accomplishments. “If someone complimented him,” VandeBerg says, “he would just smile and say, ‘That’s very kind of you.’”

Author plasticsinfomart 70
During a recent plastic products market conference held in Dhaka, Bangladesh, there are opinions made by European attendees saying the consumption of plastic products...
Read More