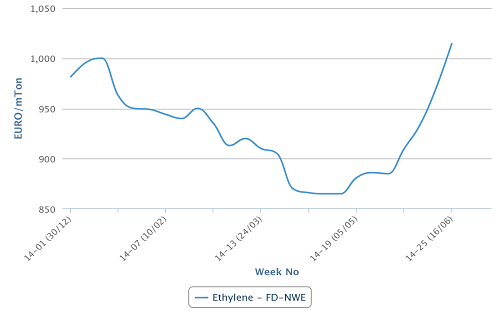 According to ChemOrbis, players in Asian PVC markets are speculating about the likely direction of the market for the coming month while waiting to hear new announcements from a Taiwanese major, which are expected to be announced next week. Some players hope that an anticipated up-tick in demand following the end of the monsoon season will give sellers space to lift their prices in the coming month while others counter that softer spot ethylene prices and lackluster demand in other key Asian markets will maintain downward pressure on Asian PVC prices.

A pipe converter in India predicted that PVC prices could move higher in October, basing their predictions on news that a domestic PVC producer is planning to conduct a maintenance shutdown in the coming month along with expectations that demand will improve following the end of the monsoon season. A distributor added, “Demand from traders and distributors has improved, although demand from converters has not yet shown any major improvement. We expect to see further improvement in demand in the coming month.” A source from a Pakistani producer added, “We are not exporting to India for now, but we may resume offering to the Indian market in October if demand and prices move higher in line with our expectations.”

Other players commented that they expect to see largely stable prices in the coming month. “We expect to see better demand from India next month as the monsoon season is coming to an end and Indian buyers have been purchasing in smaller than normal quantities for the past few months. However, we feel that prices are likely to rollover as demand from Southeast Asia and China is likely to remain depressed. We are shifting more of our export allocations to India as aggressive offers from Chinese sellers have made it more difficult for us to compete in Southeast Asia recently,” a source from a Japanese producer reported. A trader added, “Demand conditions should improve after the monsoon while a planned shutdown at a Taiwanese producer’s plant may result in some supply limitations. However, we still expect to see rollovers next month as buyers are expecting further reductions and will offer resistance to any increase attempts.”

At the other end of the spectrum, some players argue that prices may see further reductions in October as per ChemOrbis pricing service. “Demand from India will improve, but Southeast Asia and China are not likely to see better buying interest and the effect of shutdowns may be limited by the fact that several major Asian producers are raising their allocations to the Indian market. In addition, spot ethylene prices remain weak,” a player reported. A trader offering Taiwanese PVC to India commented, “Supply is sufficient in the market as many buyers have been purchasing at less than normal levels for some time. Most converters find the prevailing offer levels to be quite high and we believe that this will result in a stable to softer trend in the coming month.”