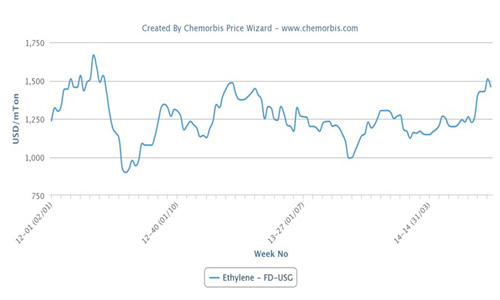 Players report that buying interest for American PVC cargoes is generally low in Turkey and Egypt nowadays as per the pricing service of ChemOrbis. Import American PVC offers currently retain their strength at steady levels in those markets supported by firm dynamics in the US. Ethylene costs remain high given relatively reduced supplies for the monomer while US domestic market levels are also holding strong amidst new hike intentions from producers for August and even September. However, the demand status may exert downwards pressure on US offers into these export markets if it continues to be low over the coming term.

In Turkey, overall PVC activity is not vivid which is attributed to the suspended exports to Iraq. Plus, large amounts of PVC cargoes entered Turkey in July as a result of the purchases made during June, when demand showed a revival, some traders argued. Some converters are also said to be quite indifferent to new purchases due to their unsatisfactory end businesses.

More US PVC offers on FCA bonded-warehouse basis have been reported in Turkey’s import market recently. In other words, some traders were apparently not able to sell their cargos on CIF basis and had to put them to bonded-warehouses. Sellers already admitted being unable to make sales on the high ends while a buyer claimed, “If I were to raise firm bids, I would easily obtain a slight discount for US PVC.”

A trader stated, “Demand has not shown an improvement following holidays which may be attributed to a number of factors including ongoing liquidity issues, halted exports to the Middle East and reduced bank credits. Some traders are refraining from securing US cargos as they are long distance amidst a waiting mood among players.” A second trader highlighted, “Export markets are still doing poorly including Iraq and Libya since converters are trying to postpone shipping dates of their previously purchased cargos.” Two traders commented that even if American PVC sellers may return with some hike attempts, they would ultimately concede to discounts given lackluster demand.

In addition, many players in Turkey reported that yearly re-export quotas are nearly filled. These quotas allow converters to import American PVC, which is subject to higher duties relative to other origins, without paying the duties.

In Egypt, buying interest for American PVC is not vivid either. “Many buyers concluded their deals until the end of July before prices jumped around $40/ton following the holidays. Sellers adopted a relatively flexible pricing policy this week while some of them started offering slightly more competitive prices in response to unsupportive buying interest,” players in the country opined. Converters with sufficient inventories are reportedly not rushing to buy at current high levels.

At the same time, the Egyptian PVC producer, EPC, has restarted one of its VCM units this past week and more domestic materials are expected to be available to the market.

Upstream, spot ethylene costs were reported at 65.5 cents/lb ($1444/ton) on FD USG basis by the middle of this week. Although the level lost around 3.75 cents/lb ($83/ton) since early August, it still represented the highest level in more than two years, according to ChemOrbis Price Wizard.

Ethylene supply constraints partially persist in the US while restarts of some crackers have eased availability. LyondellBasell restarted its cracker towards the end of July and ethylene allocations were removed as of August 1, according to players in that country. On the other hand, Williams announced that their cracker restart will be delayed from July to the fourth quarter. Chevron Phillip’s cracker at Port Arthur, Texas was shut on July 8 due to a fire and ethylene allocations are reportedly in place through October. The exact restart date for the cracker is undisclosed.

According to ChemOrbis, ethylene supplies have improved, players in the US reported, which should help boost operating rates for PVC. However, domestic producers are seeking price increases of $44-66/ton for August and one producer is seeking another $44/ton for September. Buyers are expected to resist due to the lower cost of production in August.