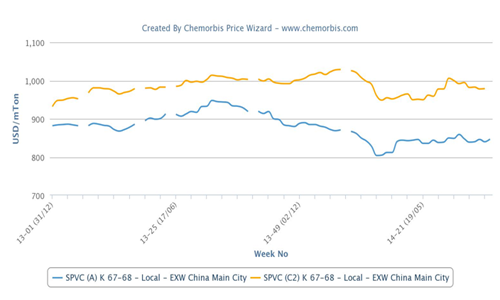 An ethylene based producer elected to keep their local prices stable while selling out their export allocation. A producer source commented, “We lowered our operating rates and we are not optimistic about the outlook. Prices are unlikely to gain ground considering sluggish demand and pressure from lower acetylene based PVC prices .”

An acetylene based PVC producer is continuing to give stable offers. A source from the producer reported that they are focusing more on their local sales and added that they have concluded some deals with their regular customers. The producer projects a steady trend for the short term while running their plant at full capacity.

A distributor offering Japanese PVC to China commented, “Our sales lost speed recently as some of our customers shifted to use local acetylene based PVC in order to reduce their costs.” The seller thinks that prices are unlikely to move higher given sluggish demand and weaker ethylene costs.

According to ChemOrbis, most sellers are yet to determine their new PVC prices as they were waiting to see the new offers from a major Taiwanese producer, who issued discounts of $10-20/ton on their September PVC prices to China at the beginning of this week.

Author plasticsinfomart 80
Oil dropped to about $93 per barrel for the first time since February as the European financial crisis kept investors on edge about the...
Read More

Author plasticsinfomart 86
Spot ethylene traded in familiar territory Thursday and propylene was again quiet while energy gains dominated the day’s headlines. NGLs were up across the...
Read More