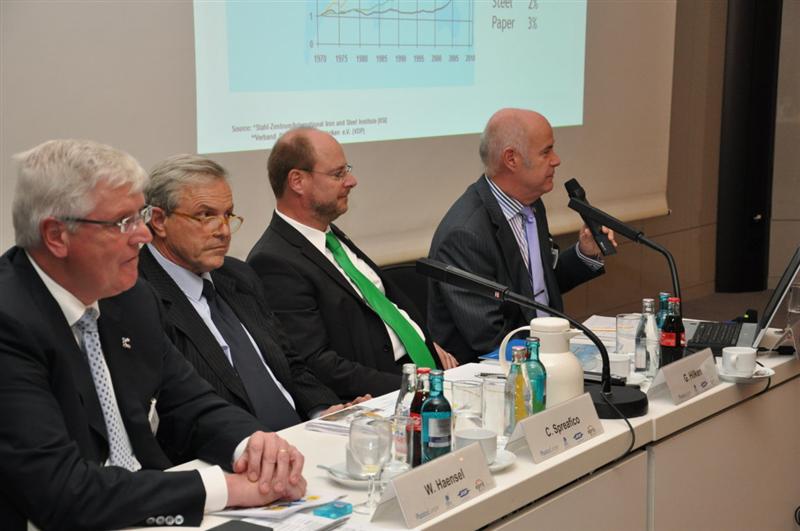 BRUSSELS (15 October 2013) — With an eye toward the proposed U.S.-EU free trade agreement known as the Transatlantic Trade and Investment Partnership (TTIP), plastics industry leaders from the United States and the European Union today made an educational presentation to members of the European Parliament and their staffs describing plastics many contributions toward improving quality of life, sustainability and the environment.

The plastics industry is a major factor in the economies of both the U.S. and the EU, and is certain to play an important role in the recently delayed but still ongoing negotiations for the TTIP. “There has always been a strong economic case for a transatlantic trade deal,” said Michael Taylor, senior director, international affairs and trade for U.S.-based SPI: The Plastics Industry Trade Association.

“But at this point in time the argument in favor is even more compelling. While it is true that the U.S. plastics industry stands to benefit greatly from improved market access to Europe, SPI member companies are very focused on the millions of dollars that can be saved by achieving regulatory coherence and mutual recognition of standards. This will lower the bar for market entry for both the EU and the U.S.”

In addition to SPI: The Plastics Industry Trade Association (based in Washington, D.C.), today’s presentation to the EU Parliament, other EU institutions, business representatives and interested parties was co-organized by Amcham Belgium (the American Chamber of Commerce in Belgium) and Assocomaplast (the Italian Plastics and Rubber Processing, Machinery and Moulds Manufacturing Association).

The plastics industry plays an important role in global economic growth by providing a broad variety of platforms for innovation in virtually every industrial sector. The EU parliament today heard why plastics are the true resource champions, conserving more resources than they use and offering easy recyclability. They also heard why plastics, due to their ability to be tailored to the specifics of new products, will continue to enable more innovative applications that will add to quality of life.

Confirming the essential nature of plastics in our lives, a recent study by PlasticsEurope showed that “life without plastics” in the European Union would result in a 46 percent increase in both energy consumption and CO2 emissions, and would generate an additional 100 million tonnes of waste every year across the EU. In addition, the substitutes for plastics generally would cost more and be less sustainable.

SPI’s Taylor added that, “A significant part of what SPI does on a regular basis is educational. Supporting our European colleagues at an event in the European Parliament, where we can speak about the positive contribution of the plastics industry to those who shape policy in the European Union is a major opportunity. It is vitally important that everyone be aware of how plastics improve the quality of life, from safe and efficient packaging to life-saving and life-sustaining medical devices.”

Earlier this week, on October 14, Taylor attended a public hearing held by the European Parliament titled “Trade and Economic Relations with the United States — the regulatory part in the TTIP negotiations.”

High-end technology and reliability: the basis for successful partnerships