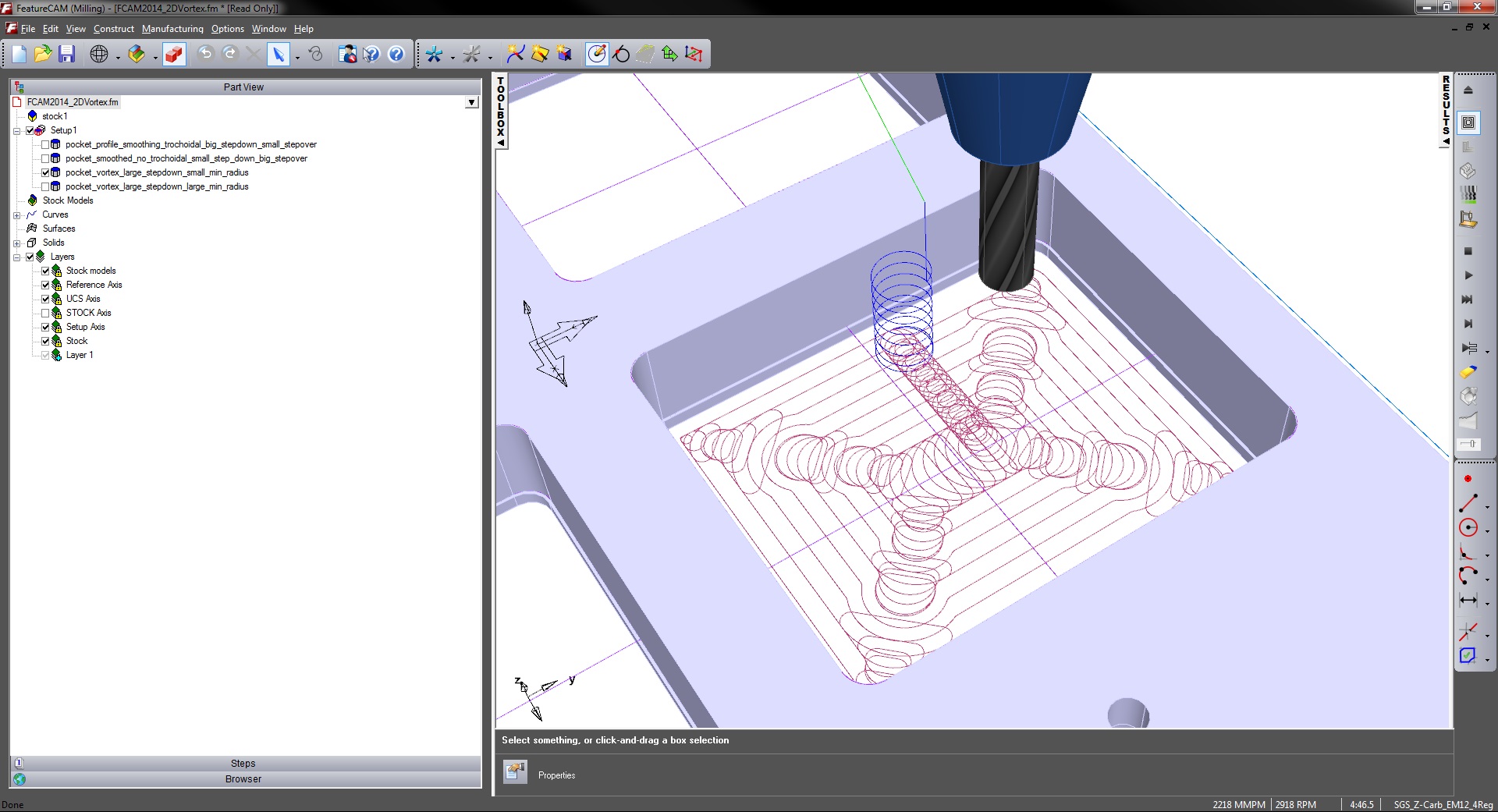 Delcam has added its new Vortex high-efficiency area clearance strategy to the latest release of its FeatureCAM feature-based CAM system. Vortex was introduced initially as the key enhancement for the 2014 version of Delcam’s PowerMILL software for high-speed and five-axis machining.For full details, including video demonstrations of the new functionality, and to download an evaluation version, please go to www.delcam.tv/fc2014.

Vortex, for which Delcam has a patent pending, has been developed specifically to gain the maximum benefit from solid carbide tooling, in particular those designs that can give deeper cuts by using the full flute length as the cutting surface. It can be used for two- and three-axis roughing, three-plus-two-axis area clearance and for rest machining based on stock models or reference toolpaths.

The strategy will be supplied at no additional charge to FeatureCAM customers on maintenance with the appropriate licenses. Two-axis Vortex functionality will be included for customers that have the FeatureRECOGNITION module, whereas Vortex for Z-level roughing will be able to be used by customers that have the FeatureMILL 3D HSM high-speed machining module. Assuming that they have one of these base products, Vortex can also be used for three-plus-two roughing by users with the positional five-axis programming option and on mill-turn equipment by customers with the FeatureTURNMILL module.

Like other Delcam roughing strategies, Vortex toolpaths are calculated to give more efficient machining by following the shape of the part and by keeping air moves to a minimum. This is particularly important for rest machining operations.

The benefits of using the Vortex strategy will vary depending on a number of factors, including the material and shape being cut, and the machine tool and cutting tools being used. A series of trials run by Delcam on different machine tools within its Advanced Manufacturing Facility has shown that a time saving of at least 40% is not untypical, with the biggest percentage savings being found when cutting tool steel on a Huron machine with SGS Z-Carb MD cutters. The cycle time for the sample part was reduced from 121 minutes to 34 minutes, a reduction of 71%.

Other examples included a reduction of 67% when cutting a number of pockets in a stainless steel part, a 63% time saving on a titanium part and a 58% saving when cutting an aluminium component.

One fundamental problem with conventional area-clearance strategies is that the optimum cutting conditions only occur during a straight-line cut. Any internal corners within the model significantly increase the engagement angle of the cutter. To protect the cutter, this increase needs to be balanced by setting a lower feed rate. The user then has the choice of using this lower rate over the whole toolpath, which increases the machining time, or varying the feeds and speeds as the cutter moves around the model and so increasing wear on the cutter.

Unlike other high-speed roughing techniques that aim to maintain a constant theoretical metal-removal rate, the Vortex strategy produces toolpaths with a controlled engagement angle for the complete operation. This maintains the optimum cutting conditions for the entire toolpath that would normally be possible only for the straight-line moves. As a result, the cutting time will be shorter, while cutting will be undertaken at a more consistent volume-removal rate and feed rate, so protecting the machine.

Because Vortex toolpaths have a controlled engagement angle, tools should never be overloaded and so will achieve the maximum tool life. Shock loading caused by changes in the contact angle is minimised, preventing chipping of the flutes. In addition, the stability of the cutting conditions gives more consistent edge temperatures, so prolonging the life of the tool coating and removing heat damage to the surface of the part. Finally, the ability to use stepdowns of up to two, or even three times, the tool diameter spreads the tool wear evenly over the cutting surface of the tool, again contributing to longer tool life.

FeatureCAM was the world’s first feature-based programming software when it was launched in 1995. Constant development since then has ensured that the system has retained its leadership in programming speed and ease of use, while an increased range of strategies has been added to provide more efficient toolpaths giving greater productivity on a wider range of machines.

Author plasticsinfomart 101
A new gasket solution from 3M combines an exceptionally conductive pad with a double-sided adhesive that is repositionable. The new 7810 series of 3M...
Read More