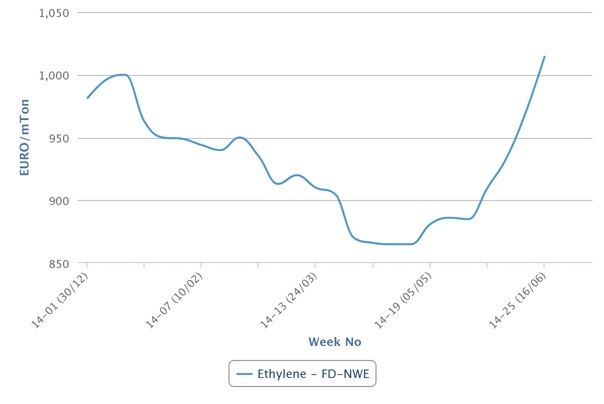 Spot ethylene and propylene prices in Europe are tracking different paths this week as per the pricing service of ChemOrbis. Ethylene prices have reached the highest level of 2014 in line with firmer naphtha costs while spot propylene prices extended their decreases due to rising supply levels.

For ethylene, spot prices climbed by €45/ton compared to last week to exceed the €1000/ton threshold on an FD NWE basis. Reduced availability following the shutdown at Shell Chemical and BASF’s joint venture in Moerdijk continued to support higher prices. Market sources reported that the cracker at the same site was running at reduced rates following the fire at the propylene oxide/styrene monomer plant.

In addition, spot naphtha prices on a CIF NWE basis have climbed by around $30/ton over the past week, pushed up by firmer crude oil. Both NYMEX and Brent crude oil prices hit an eight month high towards the end of last week as the escalating violence in Iraq, the second-largest oil producer among the Organization of Petroleum Exporting Countries (OPEC), raised concerns about a disruption in supply.

For propylene, however, spot prices on an FD NWE basis have declined by €30/ton on the week, maintaining their downward momentum since the beginning of May. The recent softening in propylene was attributed to ample availability. Despite the storm that occurred in Germany last week and stronger naphtha, propylene supplies were not much affected, players reported.

PVC trend firm in Asia and Europe, US on the soft side