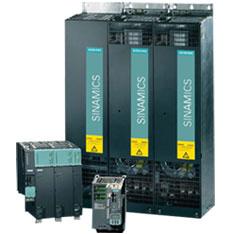 Siemens has bolstered its Sinamics S120 modular drives system with support for industrial Ethernet protocols, providing networking capability that will allow manufacturers to create a single network for factories and plants.

The Sinamics drive family now offers direct connectivity to both Profinet and Ethernet/IP, the two main protocols being used in the manufacturing industry to connect systems and devices across factories and plants, according to Siemens. The drive’s Communication Board Ethernet (CBE20) now features selectable industrial Ethernet stacks, with a single parameter allowing the board to operate with Profinet, Ethernet/IP, or other stacks depending on connectivity preference. With four ports, the drives support custom configuration without additional hardware, the company says.

This flexibility of networking support allows plant manufacturers to leverage the drives as part of their architectures no matter which other automation or connectivity technologies they have in their systems, Craig Nelson, a marketing and product manager at Siemens, told Design News in an email:

There are various plants in North America that have installed or standardized on EtherNet/IP as their Industrial Ethernet variant particularly because of their installed base of automation vendor. Customers, especially OEMs, can now standardize on the Sinamics drive offering regardless of the automation platform or Industrial Ethernet variant they choose for their machines.

Sinamics drives feature power ranging from fractional HP to over 5,000 HP in one drive, as well as common DC bus multi-axis formats. The drives can run servo, vector, and V/Hz modes, allowing them to control a range of motor types, including induction, servo, linear, and torque motors, according to the company. OEMs use Sinamics drives in a variety of applications, including packaging, textile, printing and paper machines, handling and assembly systems, and machine tools, to name a few.

As manufacturing plants become more automated and connected, automation and control vendors also are supporting native networking in drives, motors, and other technologies. Siemens is no exception. In addition to the Sinamics drive news, the company recently said its next generation of Simatic controllers — the Simatic S7-1500 line — will include multiple Profinet interfaces.