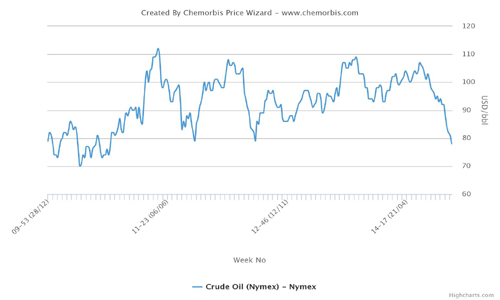 According to ChemOrbis daily headline, Saudi Arabian petrochemical producers reported lower financial results for the last quarter of 2014. The majority of companies faced lower profits or even losses during the period mainly due to the dramatic falls recorded by global energy costs since June 2014 which led to lower product prices.

The company attributed their falling profits to lower average prices for their products sold, although this was partly offset by lower feedstock prices, as plummeting global energy costs pushed petrochemical product prices down. Meanwhile, Sabic maintains their plans for growth up to 2025, with investments focused on China, North America and Saudi Arabia, according to a statement from Chief Executive Mohamed Al-Mady.

Rabigh Refining and Petrochemical Co (Petro Rabigh) posted a fourth-quarter net loss of SR198 million ($53 million) after achieving a profit of SR1.24 billion in the fourth quarter of the previous year. According to market sources, the company blamed inventory losses caused by sharply lower energy costs. On the other hand, Petro Rabigh saw a 90% increase in net profit to SR681 million for the full 2014 amidst stable operations.

Yanbu National Petrochemical Co. (Yansab), a subsidiary of Sabic, posted a 39.7% rise in fourth-quarter net profit which was attributed to higher sales and production from a year earlier. Yansab made a net profit of SR617.8 million ($164.6 million) in the last quarter of 2014 year over year, up from a previous SR442.2 million. Regarding the full year, the company’s net profit at SR2.48 billion was down from SR2.64 billion in 2013 due to lower sales prices for their products.

Saudi Arabia’s National Industrialisation Co (Tasnee) revealed a 46.5% plunge in fourth-quarter net profit year over year given lower prices for its petrochemical products in addition to titanium dioxide and acrylic acid. Regarding their latest earnings, the company reported a net profit of SAR160.7 million ($42.8 million) in the fourth quarter, down from SAR300.1 million in the previous year.

According to ChemOrbis, Saudi International Petrochemical Co (Sipchem) also declared a 33% decline in their Q4 profit year over year citing falling sales and production. The company recorded a profit of SR132.4 million ($35.28 million) when compared to SR196.8 million in the year before. For the whole 2014, Sipchem’s profit was SR606.2 million, down from SR 620.5 million in 2013.