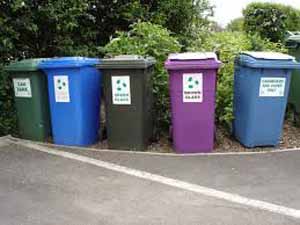 In response to it, Pat Grieve the waste management representative said that the residents were given a clear guideline of the type of wastes to be dumped in the recycling bin during the distribution of those bins.

Apart from the type of wastes to be dumped, confusion regarding the dates and time for the picking up of recycling bins have also confused the residents recently. It was found that the waste management center has been receiving a good number of calls to know the picking schedule. The picking up schedule was also clearly given to the residents at the time of installation.

The date of picking for the residents living at the North East of Green Street is Oct 9 and Oct 23, while recyclables of those living at the other side of the city would be picked on Oct 16 and Oct 30. Waste management reported that this schedule will continue for every other week.The installation of recycling bins began after a contract between Baltimore City and Waste Management, the new contract which was renewed on Aug 1st. As per the contract, the Baltimore residents ought to pay $9.50 per month for waste recycling. For hazardous waste services, an additional $1.48 should be paid.

Lubrizol® to Showcase Integrated TPU Line For Adhesives At K 2013