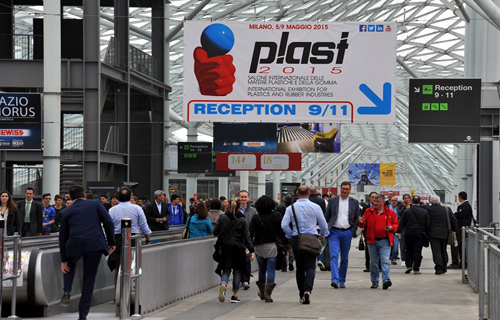 PLAST 2015 opened its doors today at the Fiera Milano fairgrounds in Rho. Taking place every three years, the International Plastics and Rubber Fair is organized by Promaplast Srl. In its seventeenth edition this year, the Fair enjoys the extraordinary coincidence, in both space and time, with EXPO 2015.

PLAST 2015 is one of the largest and most important tradeshows in the world for the plastics and rubber industry. Continuing until Saturday, 9 May, it will host 1558 exhibitors in 55 thousand square metres of space, representing machinery and equipment manufacturers, producers of raw materials, converters and much more. And PLAST 2015 boasts a 4% increase in participation with respect to the previous fair in 2012.

PLAST 2015 stands as an important showcase mainly for its international dimension, a fact that has been recognized by the Italian Ministry for Economic Development. Thanks to the support of the Ministry and the agency ICE, PLAST 2015 is honoured to welcome delegations from forty countries (including China, India, Mexico, United States, Turkey, Russia and South Korea) with at least 300 authorized delegates from plastics and rubber converters who will meet with machinery builders and Italian firms at the Fair. Also featured will be some forty trade associations from all corners of the world with their own institutional stands, as well as Italian universities.

The inaugural convention took place today to open PLAST 2015. It was an occasion for discussing trends in the sector in Italy and in the rest of the world with the president of Assocomaplast, Giorgio Colombo, the president of Federazione Gomma Plastica, Filippo Bettini, and the president of PlasticsEurope Italia, Daniele Ferrari.

“The year 2014 was a positive one, both for exports, which recorded a +4.9%, and for the domestic market with a somewhat more modest +2% that nevertheless marks a change in a positive direction,” commented Giorgio Colombo, president of Assocomaplast. “We have before us a scenario that has all the trappings of a successful event, and that indeed has already recorded positive numbers, with 14,000 pre-registered visitors, more than twice the total in 2012, and new companies that have decided to present themselves at PLAST and stake their bets on this important tradeshow. There is an entrenched optimism in our industry, which we hope is not just a flash in the pan: the debate has to focus on enterprise, because this is the engine that will get the national economy moving again. Innovation, the great strength of our companies, is generated all along the production chain, and comes to fruition in our country’s relations with its customers.”

Marco Fortis, economist and vice president of Fondazione Edison, also weighed in on prospects for the industry: “Income for the industry slumped between 2011 and 2012, mostly due to the ill-conceived austerity policies that damaged producers and the domestic market, while Italy continued to export. Proof that our industry is highly competitive is seen in the fact that revenues from exports have grown even more than they have in Germany. There are many niche markets where Italy is the undisputed world leader, including the machinery and the plastics and rubber industries. Indeed the indices of excellence in international trade give our country a permanent seat on the podium, competing with Germany for the highest tier.”

In spite of the recession and economic difficulties in recent years, which have affected nearly all sectors of Italian and international industry, manufacturers of machinery and moulds for plastics and rubber have proven to represent a robust market, as underscored by the data for 2014 (as compared to the previous year): production +2.6%, exports +4.9%, imports +8.5% with a production output that reaches 4 billion euros.

The inaugural convention closed with the Plastic Technologies Award 2015, organized in collaboration with POLI.design. This year’s prize focuses on the disposal and recycling of rapid-obsolescence, temporary or throw-away products, components and packaging. The first prize went to Marco Grimoldi and Tommaso Pardini’s Palingenesi.

PLAST 2015 includes three satellite fairs: RUBBER 2015, dedicated to the rubber industry, which already promises to be highly successful (+30% exhibitor participation with respect to 2012); PLAST 3D, a new section dedicated to additive manufacturing using plastics, rapid prototyping, modelling software, 3D printing and related technologies; and START PLAST, a new area set aside for some 40 selected start-ups who are invited, free of charge, to exhibit their products, technologies, software, etc. relating to the world of plastics and rubber.

A last but no less important novel feature at the Fair was the presentation of the upcoming edition: PLAST will be back from the 26th to the 30th of September 2017, one year earlier than would be dictated by its normal three-year cadence to avoid conflicts with other major fairs for the industry.