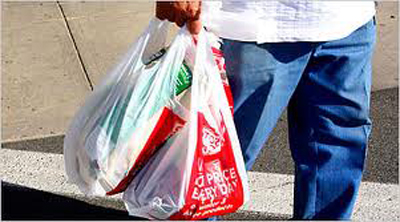 NEW YORK  : The New York City Council proposes to collect a mandatory 10 cent fee on every plastic and paper carry bag at retail stores and grocery outlets across the City. The Council intends to reduce the hazards of plastic bag waste in an attempt to create healthier living environment.

According to the proposed legislation to be presented before the council Thursday, the City would soon commence a public awareness campaign by which the residents will be distributed reusable bags free of cost. It prevents the groceries and retail outlets from collecting the fee before the culmination of citywide bag giveaways.

Thereafter, groceries and retail stores can charge 10 cents fee from the customer on every sale of plastic or paper carry bags. The proposed charge would not be a tax and the stores are authorized to keep the money to cover the cost of bags. Restaurants are exempt from the above legislation, due to limited available alternatives. Any store that breaks the rule twice shall be charges with a fine of $250.

Meanwhile, The American Progressive Bag Alliance has already raised protests against the move. It claimed that the plastic bags being used in the City are 100% recyclable and that the administration should concentrate on boosting proper reuse and disposal of plastic bags. According to estimates, New York City consumes nearly 5.2 billion plastic bags per annum, majority of which are not recycled

Author plasticsinfomart 151
The winning Extruders Market business report includes both qualitative and quantitative aspects of the industry in each region and country mentioned in the market research study....
Read More
Environment Recycling News