Upper Highway residents can once again drop off their cleaned plastics at the recycling depot in Delamore Road.

PLASTIC will once again be accepted at the Keep Hillcrest Beautiful Association’s recycling depot in Delamore Road. 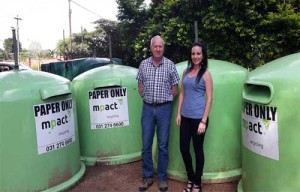 Marge Mitchell, chairman of the Keep Hillcrest Beautiful Association, said the NPO received a deluge of calls in connection with the stoppage of plastic collections in January and welcomed the new partnership with Mpact. She said the Association was recently approached by Dave Smith and Rosanne Griffin from Mpact (previously Mondi). “They said they had the facility to accept plastic and offered to work with the Association. This is good news for the centre as it means that the recycling site will again accept plastic from the public, and Mpact will be the service provider,” said an ecstatic Marge.

When dropping off recycling at the depot, Upper Highway residents are urged to drop off their washed plastic in a separate bag. “We request and plead that you do not mix the plastic with other items such as paper, tins and cardboard,” said Marge.

“As you all may know, the recycling centre in Delamore Road has been serving the public for eight years,” said Marge. “It is run and managed by volunteers of the Keep Hillcrest Beautiful Association and is well supported by members of the public.” The income received from collectors Mpact, Collect-a-Can and The Glass Recycling Company is distributed among the staff who are given 90 per cent of the funds, with 10 per cent being going towards KHBA’s projects.