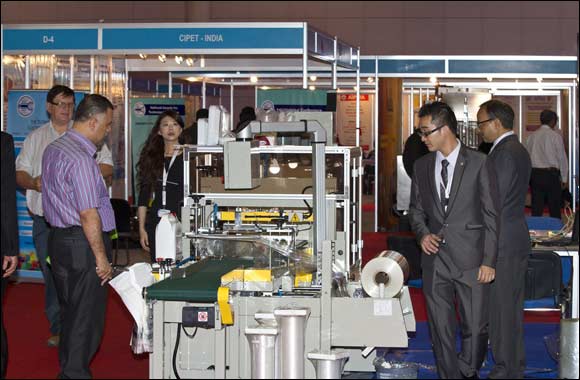 Sharjah, 21 July 2014: The Plastivision Arabia, international plastics exhibition and conference, which is scheduled to be held at Expo Centre Sharjah in2016, is set to generate considerable buzz within one of the fastest growing sectors in the manufacturing industry in the Middle East – packaging.

And, aimed at taking advantage of the favourable market conditions and timing it along with other industry gatherings, the show dates have been advanced from April to January, with the third edition of the biennial show now planned to be held from January 10-13, 2016.

“The third Plastivision Arabia will build on the impressive launch of the show in 2012 and its repeat performance in 2014. Taking into consideration the favourable market condition, we have also decided to advance the show dates, which will benefit both exhibitors and visitors alike,” said Mr. Saif Mohammed Al Midfa, CEO, Expo Centre Sharjah .

Expo Centre Sharjah will continue to partner with All India Plastics Manufacturers Association (AIPMA), the oldest and the largest apex body of the plastic industry in India, for the upcoming edition of Plastivision Arabia.

With the US$4 billion flexible packaging industry in the Middle East and Africa forecast to grow five per cent annually, the industry is betting big on the event, which created a record of sorts for the second consecutive edition in 2014 when all the live machines on display were fully sold out.

Plastivision Arabia 2014 featured more than 150 exhibitors at 14,000 sq m of exhibition space. The show had registered a 40 per cent rise in exhibition space occupied and the visitor turnout stood at an impressive 7,277.
The show has become a must-visit within the industry largely due to a rise in demand for packaging, with the packaging market being seen as one of the fastest growing sectors in the Middle East.

Manufacturers have benefited in a big way from bulk import and repackaging demand from the GCC given the tax-free, cheaper manufacturing costs and re-export advantage. The GCC is one of the largest re-export markets for food & beverages, pharmaceuticals and consumer goods, leading to a booming packaging market.

About Plastivision Arabia 2016:
Plastivision Arabia 2016 will be organized by Expo Centre Sharjah , in association with All India Plastics Manufacturers Association (AIPMA), and the support of the Sharjah Chamber of Commerce and Industry. It will be held at Expo Centre Sharjah from January 10-13, 2016, displaying raw materials and machinery for key segments such as plastic processing, injection molding , thermoforming, packaging, industrial users, construction, infrastructure, automobile and telecommunication, among others.

LANXESS on track with EPDM project in China

Author plasticsinfomart 163
The global e-commerce plastic packaging market was valued at USD 10.26 billion in 2020, and it is expected to reach USD 21.78 billion by...
Read More