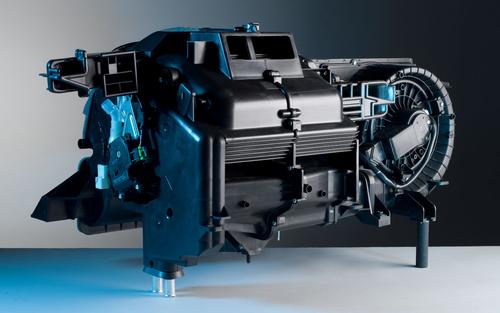 Think there are no more metal-to-polymer conversions left in automotive design? Think again. Materials development efforts in the past several years that were aimed at raising stiffness, impact, and heat resistance have succeeded on all counts. Combine that with the increasing sophistication of automotive designers, who are pushing the envelope on material selection as they seek to reach fuel economy goals, and you have a perfect setting for the next generation of metal replacement.

Automotive designers were originally focused on replacing metal with plastics in a limited number of applications, but today’s polymeric materials are meeting the challenges of emerging design and engineering criteria in more areas of the vehicle. While the easy applications have long since been converted — those that are left are the tougher ones — the good news is that the palette of polymer alternatives has become tougher, as well. Further, automotive engineers now have a better grasp of best-practices for designing with polymers.

Rather than looking for materials that can replace a metal part using the identical geometry, designers are now capitalizing on the additional freedom to form plastics into net shapes. The substitutions aren’t limited to metal either. Designers are also replacing thermoplastic vulcanizates (TPVs) with easily recyclable and colorable thermoplastic elastomers for a host of benefits. Let’s take a look at some reasons and examples.

Why replace traditional materials?
Today, there are four compelling factors driving metal replacement in automotive applications — weight reduction, design freedom, part geometry, and part consolidation. Reducing weight is at the top of the list. Studies by the EPA and other organizations show that every 5 percent of vehicle weight removed can improve fuel economy by 2 percent. Generally, replacing a metal component with a plastic one results in a 50 percent weight reduction, so the math is attractive to designers striving to reach Corporate Average Fuel Economy (CAFE) targets. Better fuel economy also means lower greenhouse gas emissions, which rose again globally by 2 percent in 2012 to a record high of 2.4 million pounds per second.

Running a close second on this list is the additional design freedom that today’s advanced plastics afford. In other words, advances in polymer formulation technology are enabling more design freedom than ever before. Rather than welding, fastening, and bending — all of which require secondary operations and therefore more cost — most automotive plastic parts are produced to net shape in one automated operation.

Geometry is yet another freedom. Plastic part design has become a sophisticated science, enabling parts to be designed to exact contours to save space under the hood. Additionally, bumpers and fascia can be more aerodynamic and stylish, and interior components can bend to the designer’s will for greater differentiation.

Finally, all of these factors combined allow multiple metal parts to be redesigned and replaced by plastics and consolidated into a single unit for reduced after-sale maintenance and production process improvement.

Polymer options abound
Today’s automotive designers are looking for system optimization, greater design freedom, process improvement, and the ability to adapt to regulatory changes. Polymers are providing answers to these challenges, and the palette of choices keeps growing.

Thermally and electrically conductive plastics now sport 10 to 100 times more conductivity than conventional plastics, a level equivalent to stainless steel. They’re making their way into heat sinks, EMI/RFI shields, and a range of components for hybrid electric and electric vehicles, such as connectors, power electronics, and infotainment modules.

Proof in production
One recent success story underscores the fact that not all materials replacement in vehicles involves metal to plastic conversion. Designers at DENSO, a leading technology, systems, and components supplier to major automakers worldwide, were seeking an alternative to a TPV seal used in the HVAC unit of a new car model, looking to enhance the overall performance of the system.

DENSO collaborated with PolyOne, a leading materials solutions provider, on a thermoplastic elastomer (TPE) solution that met their in-service performance goals while reducing the total system cost by eliminating the need to pre-dry the material. The TPE alternative also provided more than a 5 percent improvement in processing efficiencies thanks to shortened cycle time and scrap reductions.

Current metal replacement projects prove that it isn’t always just steel that’s being replaced. Thermally conductive polymers are now replacing aluminum, which is a traditional, lightweight alternative to steel for automotive designs. Aluminum heat sinks are used in automotive high-brightness LED headlamps to reduce overheating and hot spots that can shorten the lifespan of the entire unit and reduce its lighting performance. While LEDs consume less energy, managing the heat generated by LED electronics is critical to maintaining useful life and energy efficiency.

Headlamp suppliers are also finding that a move from aluminum to plastic gives them the ability to create custom shapes to meet the need for product differentiation among automakers, for which headlamps have become a signature. In addition, the removal of secondary operations such as drilling and painting are a welcome benefit.

How it’s done
To make materials replacement successful, the first step involves bringing design team members and material supplier technologists together to evaluate the overall system and opportunities for improving it.

Rather than taking a silo approach, in which each component is designed in relative isolation, designers and their material suppliers together evaluate the product in terms of function, looking for areas where plastics and/or TPEs can provide equivalent performance to traditional materials along with a host of other benefits.

When replacing metal, the first consideration is often stiffness and impact at low and high temperatures, because these two properties are likely the reason metal was chosen in the first place. When replacing elastomeric materials, the considerations are durometer (hardness) and compression set. It’s helpful to remember that on their own, plastics are not as rigid as most metals, but can nonetheless replace metals with the addition of ribs to the design or filler to the base resin without sacrificing performance levels, leading to an optimum strength-to-weight ratio.

The next opportunity for replacement lies in conductivity for heat dissipation, as in the high-brightness LED example, as well as electromagnetic shielding (EMI/RFI). Thermally and electrically conductive polymer formulations can be tailored to specific applications, making them more cost effective than metal.

Finally, the team of designers and material technologists considers aesthetics, magnetic properties, perceived quality, and density. As an example, OEMs are now turning to plastics with a metallic filler to create engine covers that improve aesthetics and perceived quality while removing paint, associated VOCs, and cost from the process. Again, to meet the specific targets in an application, a material supplier can customize each of these categories and can also combine them according to the application’s needs.

Using this approach offers an opportunity to significantly redesign components to utilize the polymer material to the fullest. This can involve functional integration, in which two or more components in an assembly are combined. Further, this approach can include designing for productivity improvements, whether by eliminating secondary operations, reducing wall thickness for faster cycle time, or lowering scrap rates. Finally, adding functionality is also possible with metal-to-plastics redesign.