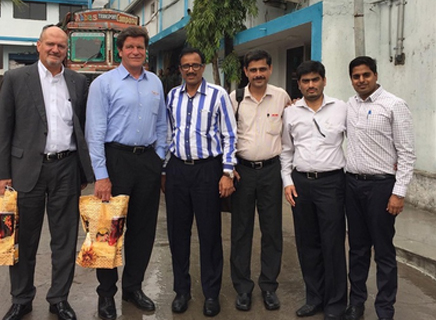 Worms / Troisdorf, October, 2015 | The Technology Center of Reifenhäuser Troisdorf is constantly delivering arguments in favor of an investment in the lines of the EVOLUTION series. The latest example was the superior web flatness of a sample film produced on a Reifenhäuser blown film line that served as ultimate argument crucial for Indian Shrinath Rotopack Pvt. Ltd’smulti-million purchase.

“EVOLUTION Ultra Flat”, the patented film flattening unit integrated in the film haul-off could convince in every respect. On the one hand, this can be attributed to the film quality improvement function and reduced complexity (technical aspects) and on the other hand to the investment cost (financial aspect) the Reifenhäuser film haul-off can score with. Furthermore, practice has shown that significant savings are possible when using webs of optimized flatness in converting processes on printing and laminating machines. In addition, the printing quality and laminating ability can be improved, in particular due to reduced curling of the film and optimized adhesion of the laminate.

When two brothers went on a journey to Europe…

Mr. Naresh Rathi and Mr. Manish Rathi, the two brothers from Shrinath Rotopack Pvt. Ltd. (SRPL), who look after the major investments of the company went to Europe for exploring the options of evaluating the renowned European machine manufacturers for their new venture of manufacturing high barrier films. They also carried the recipes of the films for which they would run tests under real production condition.

In Troisdorf, they finally came across EVOLUTION Ultra Flat, Reifenhäuser Blown Film’s patented film flattening system integrated in the haul-off. The system is able to correct and completely eliminate surface irregularities that may occur at the different stages of the web’s way through the bubble collapsing system. For SRPL there was no better reason than this to buy the machines.

Ordering of the machines…

SRPL then ordered two highly automated blown film lines which will be equipped with the up-to-date assistant systems which will be installed in their newly built factory in Hyderabad, India. The investment package includes a 3-layer line for the production of high-quality laminating film for different applications. Also included are EVOLUTION Ultra Flat and the highperformance EVOLUTION Ultra Cool cooling system. The line enables output rates of 800 kg/h to be achieved without problem. A further order was placed for a 7-layer line for the production of complex barrier film for packaging of edible oils, dairy products, liquids, meat, sea food, dry fruits, vacuum packaging, etc. The line is also intended for the production of highbarrier film for lids and asymmetric thermoforming sheets. To handle such film structures, the 7-layer blown film line is equipped with a suitable water quench bath.

Kurt Freye, Director of Sales at Reifenhäuser Blown Film says: “Our convincing technology in combination with a longstanding trusting business relationship between Shrinath Rotopack and Reifenhäuser India has considerably contributed to the fact that the purchase decision was finally taken in favor of Reifenhäuser.”