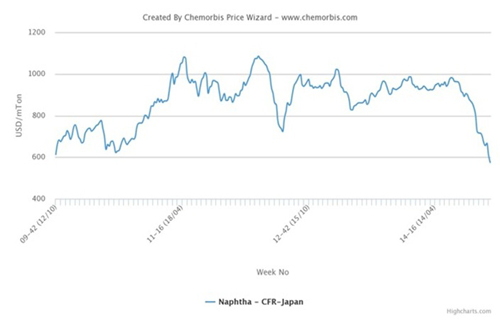 With Chinese players exiting the market for the week-long National Day holidays beginning on October 1, players have been expressing their expectations for the post-holiday period during the quiet final few trading days ahead of the holidays. According to ChemOrbis, expectations are mixed, with polyolefin players predicting firmer sentiment for PE than for PP. In the styrenics sector, most players are predicting that demand will remain stagnant after the holidays while PVC and PET players are expressing some concern about upcoming seasonal slowdowns in demand from some of their major end product applications. The ongoing slowdown in China’s economic growth is also casting a shadow over post-holiday expectations in all polymer markets.

In the polyolefin sector, PE players are generally hopeful of seeing some revival in demand. A PE trader based in Shanghai stated, “Our sales were healthy just before the holidays as buyers moved to restock in the last few days. We expect demand to remain healthy after the holidays. HDPE prices are carrying a premium over LLDPE these days as there is more new coal based capacity operative for LLDPE and this is depressing LLDPE prices.” Another PE trader added, “We anticipate seeing better demand after the holidays as buyers will need to restock ahead of some planned shutdowns in October and November.” A third trader stated, “Demand from China may not pick up that much, but we anticipate firmer demand from Southeast Asia as supplies to that region are limited and this may create some re-export opportunities.”

For PP, meanwhile, softening spot propylene costs, which have dropped to their lowest levels for 2015 on an FOB South Korea basis, according to ChemOrbis Price Wizard, along with rising supply from new coal based capacities are pushing players to voice more bearish expectations for the post-holiday period. “The supply situation may continue to loosen after the holidays as some import PP cargoes are set to arrive at the ports in October and this is likely to keep sales pressure in place,” a trader commented. A distributor added, “Domestic PP production has risen by around 20% thanks to the start-up of new coal based capacities. On the demand side, buying interest is limited and most converters have not been purchasing beyond their needs for the past several months.”

In the styrenics sector, most expectations call for demand to remain stagnant following a disappointing traditional manufacturing season over the past few weeks. A source from a domestic ABS producer stated, “We would normally work through the holidays, but have decided not to run our plant during the holiday this year as demand has been persistently sluggish and most of our customers will also be inactive.” A source from another ABS producer added, “The government had been offering stimulus measures to the household appliance sector for the past few years and demand from this sector is likely to remain satiated for some time as a result. Therefore, we do not expect to see any major up-tick in demand after the holidays.”

For PVC and PET, upcoming seasonal slowdowns in major downstream applications are weighing down on sentiment as reported on www.ChemOrbis.com. A source from an acetylene based PVC producer commented, “The ongoing slowdown in the Chinese economy, especially in the property sector, has kept PVC demand disappointing for most of the year. Some players are expecting an improvement in demand during the fourth quarter, but we find this scenario to be unlikely.” A source from a PET producer stated, “We expect that demand will continue to soften after the holidays due to the passing of the high season for bottled beverages and we plan to lower our operating rates to 70% after the holidays.”