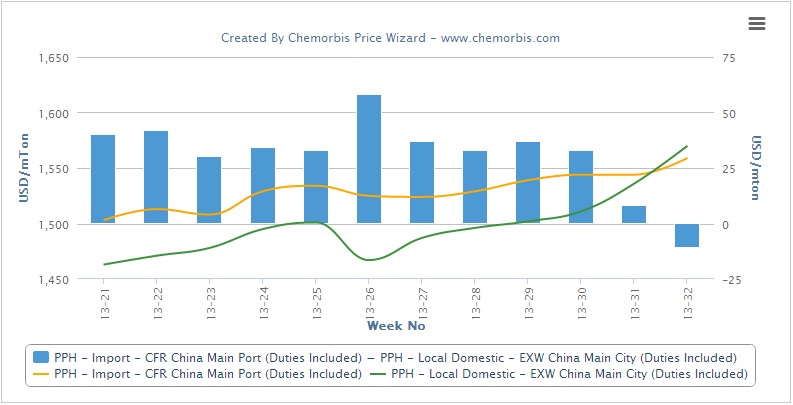 In China, PS players report improved demand in line with the high season while adding that they received higher import Asian PS offers, which caused an increase of $20/ton at the low end of the overall offer ranges for both dutiable and non-dutiable origins, as per the pricing service of ChemOrbis.

Firmer production costs were cited as the main reason behind these increases as styrene costs gained $40/ton on FOB South Korea basis week over week and crude oil prices on the NYMEX climbed over the $110/bbl threshold. In line with better demand and firmer import market prices, local GPPS prices, too, moved up by CNY100-200/ton ($16-33/ton) over this past week. Limited supply levels along with firmer upstream costs also played a role in the local market rise.

A trader who received firmer offer levels from their Hong Kong supplier noted, “Overseas producers lifted their offer levels pointing to the firmer upstream costs. Our supplier raised their prices by $10/ton when compared to the previous week.”A different trader offering on behalf of a Taiwanese producer said, “Our supplier issued $10/ton hikes on their GPPS prices and $30/ton hikes on their HIPS prices. We did not take any volumes since market prices are lagging behind these hikes for the time being.”

A B grade GPPS producer in South China said, “We lifted out local GPPS prices by CNY100/ton ($16/ton) on the back of the firmer styrene costs and our limited stock levels. We recently resumed our HIPS line on September 1 and now we run this line at lower capacity. We do not expect any softening in September since this month is usually the high season for the home appliances sector. Plus, upstream markets continue to support firm prices.”

According to ChemOrbis, another local producer reported rolling over their PS prices during this past week after lowering their offer levels for two consecutive weeks. A distributor noted, “We received CNY100/ton ($16/ton) higher GPPS prices and we believe that these hikes were prompted by firmer upstream costs rather than demand. We purchased some PS cargoes since we think that prices are likely to gain further ground in the days ahead, albeit not in large values. There might be some re-stocking activities ahead of the upcoming holidays at the end of September and the start of October.”

Bright Green Plastics: “All of the team went through a very steep learning curve”