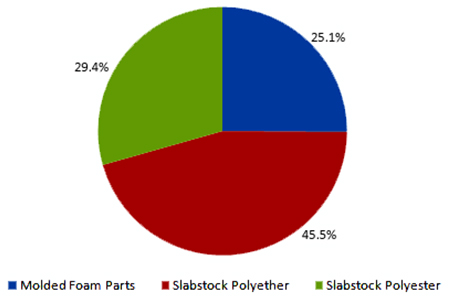 China accounted for approximately 16% of the global construction market in 2011 and is expected to overtake the U.S. to become the largest market by 2020 to capture more than 20% of total market revenue. On the other hand, India is also expected to become third largest market for construction overtaking Japan by 2020. In addition, Brazil is set to host FIFA World Cup in 2014 and Olympics in 2016, which has resulted in a huge surge in construction. Demand for rigid polyurethane foams in the U.S. and Europe took a hit during the global economic downturn and has been on a slow path to recovery since then.

However, the government support for usage of rigid polyurethane foams in refrigeration applications is expected to boost market demand over the forecast period. Rigid polyurethane foams meet standards set by ASHRAE (American Society of Heating, Refrigerating and Air-Conditioning Engineers) for refrigeration application and has given a boost to its demand in the U.S. However, volatility in MDI/TDI (basic raw materials for polyurethane) prices on account of volatility in prices of benzene and crude oil is expected to hinder the market growth over the forecast period. In addition, overcapacity mainly due to rapid capacity expansion in China has been putting pressure on the prices of polyurethane.

Key product segments analyzed and reported in this study include slabstock polyether, slabstock polyester and molded foam parts. Slabstock polyether emerged as the largest rigid polyurethane foam consumed worldwide and accounted for over 35% of total volumes in 2012. Slabstock polyether finds application in roofing and exterior wall owing to high thermal efficiency which makes them suitable for building insulation and geotechnical installation. In terms of value, the global market for slabstock polyether PU foams is expected to exceed US$7 bln by 2020, growing at a CAGR of 8% from 2013 to 2020.

Slabstock polyether was followed by slabstock polyester which accounted for 23.8% of total rigid PU foams consumed worldwide in 2012. Slabstock polyesters have been gaining considerable market share since the past few years on account of higher tear resistance and loading capacities against their polyether counterparts. Owing to these factors, slabstock polyester is expected to be the fastest growing rigid PU foam over the next six years at an estimated CAGR of 5.4% from 2012 to 2020. Molded foam parts formed the third largest rigid PU foam consumed globally and accounted for just over 20% of the total market in 2012. The global market for molded foam parts is expected to exceed 1,100 kilo tons by 2020 at an estimated CAGR of 5.1% from 2013 to 2020.

Asia Pacific emerged as the leading consumer for rigid PU foams and accounted for over 40% of total volume in 2012. Rapid growth of construction industry mainly in China and India on account of growing disposable income in the nation is expected to be a key factor driving the demand for PU foams in the region. Along with the being the largest consumer, Asia Pacific is also expected to be the fastest growing market for rigid PU foams at an estimated CAGR of 6.2% from 2013 to 2020.

Government support to boost infrastructure and construction activities is also expected to fuel the demand for PU foams in Asia Pacific. In addition, Asia Pacific is also the largest producer of PU foams on account of favorable government policies and relaxed regulatory scenario which has prompted major PU manufacturers to focus on developing Asia Pacific as a hub for PU manufacturing. Asia Pacific was followed by Europe which accounted for just over one-third of the total volume consumed in 2012.

The demand for PU foams witness a dip during 2008-09 on account of global economic recession which was followed by European debt crisis. However, the demand for PU foams is expected to stabilize in the near future owing to growth of construction industry mainly in Eastern European countries such as Russia and Poland. North America emerged as the third largest market for rigid PU foams and accounted for over 18% of the total market in 2012. North America and Western Europe are fairly mature markets for PU and are expected to grow at a relatively sluggish rate over the next six years. The North American market for rigid PU foams is expected to exceed a market worth USD 4 billion by 2020. Apart from these major economies, Brazil and Argentina have been identified as the future markets for rigid PU foams.

The global rigid polyurethane foams market is led by top polyurethane manufacturers such as Dow Chemical, BASF, Bayer Material Science and Huntsman Corporation, indicating significant vertical integration in the industry. Major manufacturers from the west such as BASF, Dow Chemical Company and Huntsman have been shifting their focus towards getting in proximity with high growth Asian market by opening up manufacturing facilities mainly in China and India on account of low manufacturing cost. Thermoplastic Polyurethane (TPU) is one of the most preferred engineering plastics by the end-user industries. TPU is preferred mainly due to its properties such as elasticity, transparency, and resistance to oil & grease and abrasion.

The TPU market is experiencing strong growth and is expected to continue to rise in the future. This growth is due to its excellent physical properties that make it an efficient replacement for traditional plastics and other materials. TPU market is experiencing huge growth that is expected to continue in the near future, mainly driven by the highly growing Asia-Pacific region and intense efforts at the customer’s end to provide better products, as per Research and Markets. Significant amount of investments are made by various market players in order to be prepared to serve the high potential regions in the future.

Presently, Asia-Pacific and Western Europe are the largest consumers of TPU. Currently, the global penetration of TPU is increasing in footwear, automobiles, and medical industry at a very high pace. The key drivers of the industry are its increased application and popularity in automobile industry and scope of developments in footwear industry. Price volatility in product portfolio offered by the market leader is a restraining factor that prevails in this market. Increase in its applications in the medical industry, as a replacement of PVC is also pushing the demand of TPU in the medical industry.

Interiors, exteriors, and under the hood applications in automobile industry, pave way for its consumption in countries with significant potential and low production capabilities. The Asia-Pacific region is the largest market for the consumption of TPU owing to several developing economies in this region. The market is further segmented and forecasted for regions such as North America, Europe, Asia-Pacific and Rest of the World (ROW), which include key growth countries, namely USA, Germany, China, Japan and Russia. The share of participants and their strategic initiatives for the overall market is discussed in detail in the report. Top players of the industry are profiled in detail with their recent developments and other strategic industry activities.

Global Powder Injection Molding Market-Industry Analysis and Forecast (2019-2027) by Type, by Industry Vertical, and by Geography

Author plasticsinfomart 74
Oil rebounded back above $53 a barrel on Thursday, after falling more than a dollar in the previous session on bearish U.S. oil inventory...
Read More

Automated test equipment market growing at a CAGR of 2.88%

Author plasticsinfomart 83
Having a decent, easily portable pressure washer about the farm is always handy but, increasingly, it seems that what you buy doesn’t always measure...
Read More