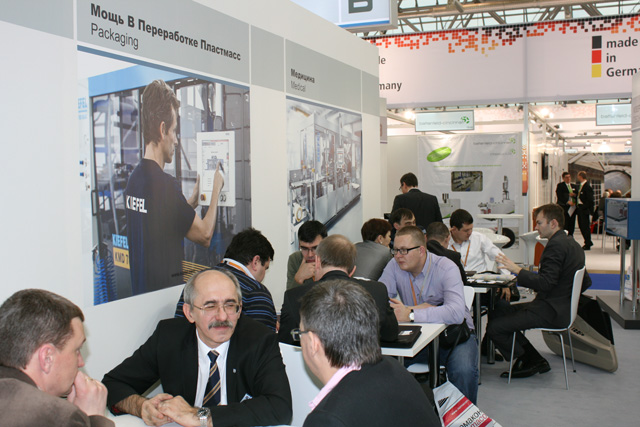 Things have got going again in the Russian plastic and rubber market. The market has bags of potential and offers some promising business opportunities – the almost unanimous verdict of exhibitors at interplastica 2013. An impressive range of innovative products and services was on show in the areas of machines and equipment, raw material production and processing at the Moscow exhibition centre Zao Expocentr in Krasnaja Presnja between 29th January and 1st February.

Exhibitor stands not only bore witness to some lively business discussions but also numerous deals. Good visitor resonance strengthened the position of the leading trade fair for plastic and rubber technology in Russia and the entire CIS region. 20,000 business visitors attended the interplastica 2013 and the UPAKOVKA/UPAK ITALIA trade fair for packaging technology being held at the same time. After talking to exhibitors from different product areas, the Chairman and CEO of Messe Düsseldorf GmbH, Werner M. Dornscheidt, was overall satisfied: “The Russian market has clearly revived; exhibitors are talking about very real negotiations and deals. Some visitors had a long way to come to experience the new technologies from international and Russian suppliers up close at the event. The very positive outcome of the interplastica gives us reason to look forward to the K 2013 in Düsseldorf this October with confidence!”

The plastics sector is a particular beneficiary of the favourable development in the Russian economy; the upturn in important sales segments has generated an increasing demand for machinery, raw materials, technical parts and semi-finished goods. The packaging sector continues to have an important role to play and the construction industry has also pepped up, mostly due to extensive nationwide renovation and modernisation activity which needs insulating materials, pipes and window frames, etc. The automotive sector has also built up momentum; a number of production sites have been built or are underway. Experts expect an increase in per capita plastics consumption of around 10 kilograms over the next four years (estimated to grow from approx. 39 kg in 2012 to around 50 kg in 2016).

interplastica was considerably larger than last year with a net occupancy of over 13,000 square metres and featuring more than 700 exhibitors from 26 countries. The largest numbers of exhibitors came from Russia, Germany, China and Italy: Russia had 212, Germany 154, China 139, and Italy 65 firms. German machines were once again Number 1 in terms of deliveries to plastic and rubber processors in Russia, with 30.8 per cent of the total number of exports, followed by Italy (16 per cent) and China (11.6 per cent). German exports to Russia in the first eleven months of 2012 amounted to €185.9 million, 9.7% higher than the same period in 2011.

Bernd Nötel, from the Fachverband Kunststoff- und Gummimaschinen im VDMA (VDMA Plastics and Rubber Machinery Association), can see good opportunities in the Russian market over the long term. “Economic development continues to promise constant growth, the situation in the country is stable and predictable for international business partners. Not only suppliers of big machines and plants can expect good figures – manufacturers of individual machine components also have interesting sales potential. Two issues remain popular discussion topics: firstly, the question of financing investments – manufacturers who offer their own solutions intensify their customer relationships by doing so. Secondly, the facilities for recycling plastics, which remain undeveloped in the country.

People are saying that the Russian state is going to provide money for implementing a recycling system. This would be important for the development of the market and also to change the population’s attitude to plastic as a “recyclable material”. According to Nötel, German exhibitors at interplastica 2013 were generally very pleased with how things went. Intense negotiations were taking place right from Day 1; business visitors not only came from all over Russia to Moscow but also from neighbouring countries, even Turkey.

A positive view of the Russian market is shared by Mario Maggiani, Director General of the Italian Plastics and Rubber Processing Machinery and Moulds’ Manufacturers Association, Assocomaplast. “For many years, of all the BRIC states, Russia was the one with the most hesitant market growth – especially when compared with the dynamism shown by China and India. The world-wide financial crisis has also left its mark in Russia. However, plastics processing has undergone a major upturn in the country since last year. The result for Italian machinery suppliers has been an increase in their exports to Russia by around 25 per cent in the first ten months of 2013.

Packaging remains a very important sales area; construction and automotive sectors are looking up. “Among the Italian exhibitors at interplastica, there were many companies who have been active in Russian for a while – they are now benefiting from good personal contacts which still play an important role in Russian business life. But some very promising new relationships were formed from the opening day, continues Maggiani. Inquiries from Siberian businessmen made us take notice – it seems like a region with big potential.

The twelve Taiwanese exhibitors, including the national machinery manufacturer’s association, also appear very satisfied with how things went at interplastica 2013. They found a positive resonance from visitors to their stands, managed to build on their existing business relationships, and create new contacts. The firms were one in stating they wanted to exhibit again at next year’s event, where they also plan to exhibit machinery for the first time.

The exhibitors at interplastica were unanimously impressed by the high level of expert knowledge of the visitors, who were well-informed and came with detailed inquiries. For their part, visitors were enthusiastic about the wide range of offers and in-depth advice offered by exhibitors. Exhibitor presentations was not the only attraction – there was a special show about raw materials, organised by Messe Düsseldorf, and its subsidiary Messe Düsseldorf Moskow OOO for the first time. Russian and international companies talked about latest developments and products. With up to 40 to 50 visitors per talk, this event was well received for a first run.