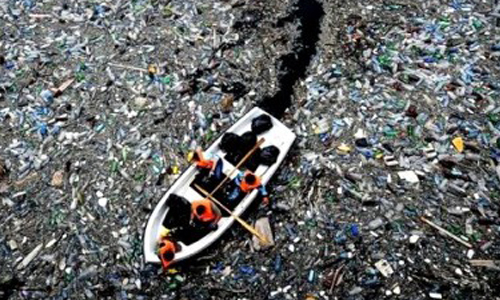 Claims that we are drowning in plastic and that most sea creatures are at threat from ingesting plastic waste found in the ocean will become true, unless legislation is passed compelling the use of oxo-biodegradable plastic for plastic bags and consumer packaging, according to Symphony Environmental Technologies, one of the UK’s leading specialists in this form of technology.

Oxo-biodegradable plastic is a ‘smart’ plastic which is made with a pre-set lifespan, so that you can control when it degrades. When it degrades, it does so completely and automatically, either on land or in water, and will ‘self-destruct’ at the end of its lifespan without leaving any messy or harmful fragments.

“We quite agree that plastic is not only harmful to the environment, but if ingested, to all forms of wild-life and sea-life which is why Symphony became interested in oxo-biodegradable plastic in the first place,” said Michael Laurier, Symphony’s CEO. “This form of plastic is designed to reduce the problem of plastic which gets abandoned into the environment on land or in the oceans and which, if not completely biodegradable, would otherwise lie there for decades.”

“Plastic is too useful for it to be banned outright, which is why we always try to stay one step ahead of the nay-sayers in developing the right technology to deal with any harmful effects.”

If all the plastic currently polluting the oceans had been oxo-biodegradable, most of it would have biodegraded by now and there would be no Pacific Garbage patch, nor any islands of floating plastic the size of Wales.

Symphony Environmental Technologies Plc is an AIM-listed company on the London Stock Exchange. It is one of the UK’s leading specialists in ‘smart’ plastics and oxo-biodegradable technology. With its Head Office at Borehamwood near London, and laboratories in the UK and abroad, it operates in over 90 countries worldwide.