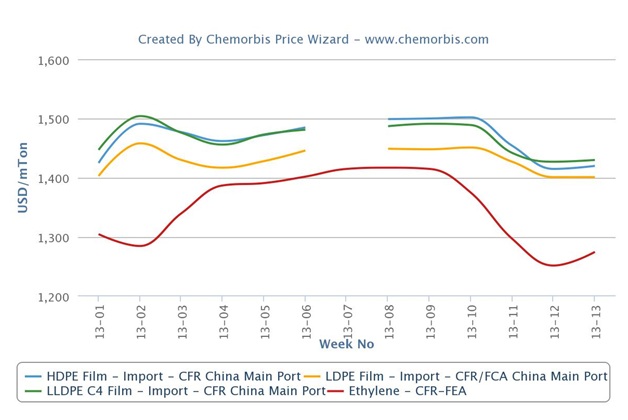 The Chinese market began official celebrations for their New Year starting last Friday and the holiday period will last until the start of next week as per ChemOrbis. Prior to the holiday, overseas producers were holding firm to their PE offers even in the face of resistance from Chinese buyers.  Now global players are waiting and watching to see what will happen to prices after the holiday.

The Chinese New Year was celebrated in the second week of February in 2013 rather than the first week of the month like this year.  Last year, import PE prices to China remained firm for nearly another four weeks following the end of the holiday.  The lack of demand during China’s absence last year apparently did not cause prices to come down in the immediate aftermath of the holiday.  However, by the start of March 2013, import PE prices felt the weight of the downward pressure stemming from lower spot ethylene costs in the region.

The downward momentum on spot ethylene prices was influenced last year by the drop in crude oil prices which began just as the Chinese players were stepping away from the market for their holiday.  Spot ethylene prices clearly resisted the downward pull of crude oil for nearly three weeks during and after the Chinese New Year holiday.  However, spot ethylene eventually caved to the lower energy costs as February 2013 drew to a close and PE prices followed afterwards.

This year, it appears a similar trend is in place in terms of PE prices defying the recent downturn in spot ethylene prices just prior to China’s New Year holiday. However, a key difference is that crude oil prices have risen over the past three weeks, so rather than exerting downward pressure on the ethylene market like last year, the crude oil market is currently supporting the Asian ethylene market.

Another key difference in the state of the PE market this year versus last year is the margin calculation between spot ethylene and PE prices. In 2013, HDPE prices carried a minimum premium of $75/ton over spot ethylene prices both before and after the Chinese New Year and were enjoying a premium of $145-160/ton even after HDPE prices softened in the month following the holiday.

According to ChemOrbis, this year the margin between spot ethylene and HDPE prices has been very thin in recent weeks, in contrast to last year’s market conditions.  In 2014, the margin has fluctuated between $26-62/ton prior to the Chinese New Year.  Even with the latest drop in spot ethylene prices, the margin between ethylene and HDPE prices has not reached even the theoretical break-even point of $150/ton.  This shows that contrary to 2013, the drop in spot ethylene prices in Asia is yet to exert any real downward pressure on PE and in fact appears more as a response to the previously unsustainable production margins on PE.

If you are a member of ChemOrbis and would like to run similar historical analysis, visit ChemOrbis Price Wizard, and if you have not upgraded yet to include monomer or feedstock costs to your package, talk to your local sales representative.

Author plasticsinfomart 67
PERTH – Oil rose above $49 a barrel on Tuesday, recouping some of the previous session’s 7 percent loss as stock markets edged up....
Read More