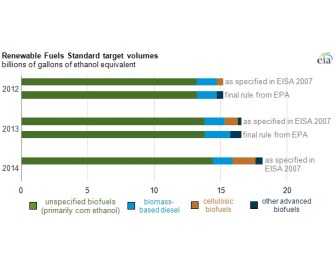 The US Environmental Protection Agency (EPA) last week issued its final rule for the 2013 Renewable Fuel Standard (RFS) program year. The rule sets a 6 million gallon target for cellulosic biofuels use in 2013, less than half the level in the proposed rule issued in February 2013, and far below the 1 billion gallon target specified in the Energy Independence and Security Act of 2007 (EISA 2007).

However, the final rule states that EPA anticipates the need to adjust those targets for the 2014 RFS program year, for which EISA 2007 specifies a total renewable fuels target of 18.15 billion gallons as production of cellulosic biofuels has grown at a much slower pace than envisioned in EISA 2007.

The RFS consists of four nested volumetric targets for specific types of biofuels. By 2022, EISA 2007 specifies a 36 billion gallon target for total renewable fuels in transportation fuel, including 21 billion gallons of advanced biofuels, of which 16 billion gallons are cellulosic biofuels.

Beyond delays in the ramp-up of cellulosic biofuels production, RFS implementation has recently been challenged by the decline in recent and projected gasoline consumption since enactment of EISA 2007, reflecting higher vehicle fuel economy standards, slower economic growth, higher gasoline prices, and possible changes in consumer behavior. The level of gasoline consumption limits the amount of ethanol that may be used in the gasoline pool at any fixed blending level, such as the 10% ethanol blend (E10) that is predominant in the current US gasoline supply.

Starting with the February 2013 edition, the Short-Term Energy Outlook (STEO) developed by the Energy Information Administration (EIA) has assumed that 2014 RFS targets for advanced and total biofuels would be held at their then-proposed, now-final 2013 levels. The forthcoming EPA proposal for the 2014 RFS rule, and the subsequent final rule, have the potential to affect EIA’s forecast of volumes and prices for motor fuels markets next year.