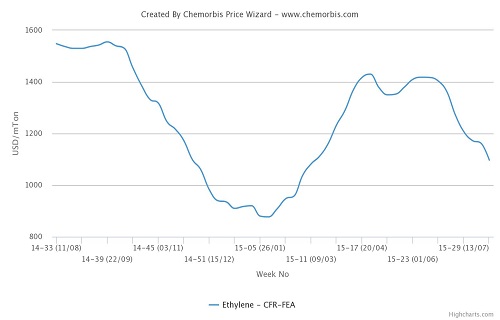 Players are widely eyeing the developments in China, looking for an indication for the direction of the PP and PE markets. Although market activities somewhat improved early last week, they cooled off later in the week due to a national holiday in China. This week, sentiment both in China and Southeast Asia is still not so clear with players underscoring the supply-demand dynamics and fluctuating upstream markets, according to ChemOrbis.

Players in general reported stagnant activities in the early days of this week, voicing their expectations about further softening, particularly on the high ends of the ranges. A Shanghai based trader said, “Demand is still not so vivid. Although there was some slight improvement last week, buyers still tend to purchase in smaller quantities.” He also added they are open to negotiation for firm bids for their Indian PP offers.

Another Chinese trader based in Linyi said, “Demand is well below our expectations and supply remains regular. Under these circumstances, done deals are rare. We heard that a major domestic producer in China is facing high inventories and two major producers are considering cutting their operating rates down to 30% by the end of September. Therefore, we think that price decreases are imminent in the domestic market.”

Other Asian markets are also closely tracking the pulse of the Chinese market. A trader based in Vietnam commented, “As long as China remains silent, we don’t expect to see a rebound in Southeast Asian markets either.” A second trader complained about not being able to sell PE while considering PP demand relatively better.

A global trader based in Singapore also affirmed sluggish demand, blaming the currency depreciation in the region. Plus, volatile crude oil is also not helping players reach a firm opinion about the direction of the market, he added.

According to ChemOrbis, another trader in Thailand said he is planning to take a wait and see stance for a while given his belief in further decreases while a film manufacturer in Malaysia drew attention to the short holiday to be celebrated at the end of September and a week-long national holiday in early October in China, arguing demand will not revive until the end of the National Day holiday in early October.