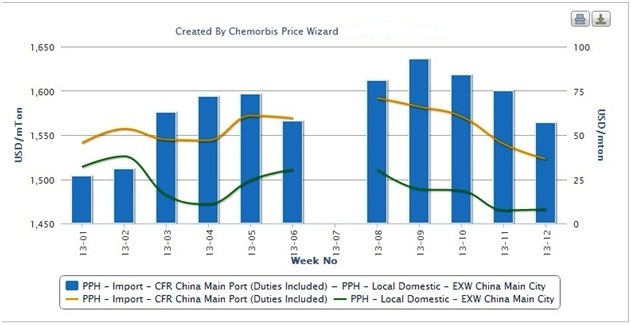 According to data from ChemOrbis Price Index, the premium import homo-PP prices carry over domestic materials narrowed for the third consecutive week and now stands at its lowest point since the week before the Chinese New Year holidays. Consecutive price reductions from overseas sellers along with domestic producers’ attempts to stabilize the market were cited among the main reasons for the shrinking premium carried by imports over local materials in China.

After taking customs duties into account, import prices first moved above local prices around the middle of December and have retained a premium over the domestic market ever since. In the first few weeks after the Chinese New holidays, when import sellers announced ambitious March increase targets while disappointing demand compelled local sellers to lower prices, the premium carried by imports over local cargoes soared to just under $100/ton. Since hitting this high at the end of February, the premium held by imports over domestic cargoes has been steadily moving lower and now stands at just over $55/ton.

The narrowing in the import premium has been driven by softening import prices along with recent efforts on the part of domestic producers to stabilize prices in the local market. “Prices regained some lost ground at the start of the week as domestic producers attempted to recover some of their previous losses and distributors took a firmer stance on their prices in line with domestic producers’ actions. However, we do not feel that prices will be able to erase their prior losses as buyers will offer resistance to any attempt to raise prices,” a distributor based in Xiamen commented. A distributor based in Beijing said, “We held our prices steady this week but do not believe that we will be able to achieve any price increases as most buyers are maintaining a needs-only purchasing strategy.”

While prices are showing signs of stabilizing in the domestic market, import prices continued to soften on bearish sentiment and limited trading activity according to ChemOrbis. “We received new April shipment prices from an Indian producer and a Saudi Arabian producer with $20/ton decreases this week. We purchased some cargoes following these price reductions given the recent signs of stabilization in the domestic market,” a trader based in Xiamen reported. A trader based in Cixi added, “The recent attempts by sellers to stabilize the domestic market have not yet had much impact on import prices. We are not hopeful that the trend in PP market will be reversible over the near term as supply is sufficient and demand from converters remains disappointing.”