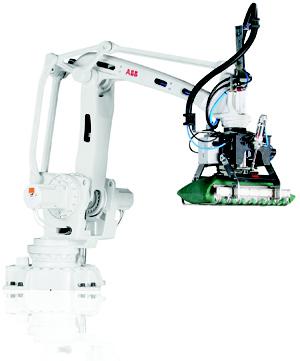 ABB Robotics has gone on a streak of packaging robots with controllers and/or software to simplify the adoption of robots in specialized applications, such as welding and cleanroom. The industrial robot maker’s latest move is a package that puts together hardware and software for high-speed, end-of-line palletizing.

The PalletPack 460 is a pre-engineered package that includes the company’s new IRB 460 robot, which was specifically designed for high-speed, end-of-line palletizing applications. The package aims at making it easier for integrators to specify and design palletizing systems. It’s also designed to lower the barriers to entry for end users into the adoption of robotic palletizing automation.

PalletPack 460 consists of fully documented, integrated hardware to lower overall project costs and reduce engineering setup time by making it easy to integrate and program the robot and its controller.

The function package comes in either a high-speed bag palletizing version or a compact, end-of-line case palletizing version. It includes an IRB 460 palletizing robot, a Flex-Gripper end-of-arm tool, an ABB control PLC, a Jokab safety PLC, PalletWare support software, and user documentation. It also includes the ABB FlexPendant, which is the standard ABB Robotics human-machine interface (HMI). The FlexPendant has a graphical interface with four screens for pallet and pick setup, pallet pattern setup, path profile edition, and movement edition.

Simplified programming is one of the package’s key features, as it is in ABB’s ArcPack Lean 1410 package for welding, which has an interface simple enough to be sold off the shelf. While the PalletPack 460 may not be that simple, its programming wizard makes the programming very similar to that used for a traditional PLC. This makes it possible for PLC programmers who don’t have experience in programming robots to program the system.

“PLC programming is a preferred programming language at a majority of manufacturing and logistics facilities,” said John Bubnikovich, executive director of marketing and business development for ABB Robotics, in a press release. “The PalletPack 460 eliminates the need for special robot programming know-how, and provides complete cell control in one function package.”

The 4-axis IRB 460, which ABB claims is the fastest known palletizing robot available, has a reach of 2.4m and a payload capacity of 110kg. It can achieve up to 2,190 cycles per hour with a 60kg load. Its compact, 100.7cm x 72.0cm footprint lets pallets be placed closer to the robot, and makes it easier to integrate it into existing packing lines.

How should the plastics packaging industry celebrate Earth Day?

Author plasticsinfomart 127
According to the latest statistics from China Customs, in January 2011, China imported 1,010 plastic processing machines at a value of US$180 million, while...
Read More

Author plasticsinfomart 135
At Interplastica 2011, a plastics and rubber exhibition to be held in Moscow, Russia, from January 25-28, 2011, Wittmann Battenfeld will display its technical...
Read More