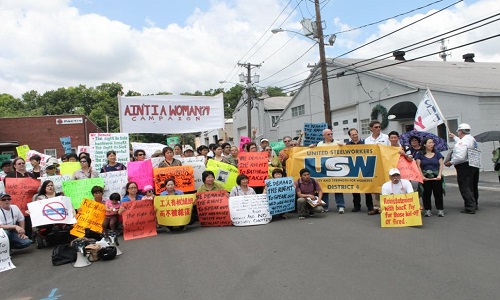 The approximately 100 women are urging Costco to stop buying from plastics conglomerate Reynolds, which draws a large portion of its product stock from a subsidiary company called Pactiv.

A group of activist-workers has a message for Costco: “Stop supporting sweatshops.” The mostly Asian and Hispanic women want the retail giant to make some wholesale changes to its plastic purchasing practices.

Specifically, the workers want Costco to stop buying from plastics conglomerate Reynolds, which draws a large portion of its product stock from a subsidiary company called Pactiv.

The approximately 100 women, all former Pactiv employees, say they were forced to toil, quite literally, in sweatshop conditions at the company’s factory in Kearney, N.J., working without water in temps that soared over 100 degrees during summer shifts.

During a particularly hot stretch at the now-shuttered plant, in 2010, one employee passed out as she was packing up plastic takeout boxes on the warehouse floor, several former staffers said.

“They wouldn’t let us open windows because they were afraid the dust from outside would damage the equipment,” recalled Li Ming, 47, who worked as a packer.

Ming and more than 100 of her former colleagues and supporters plan to rally outside the Costco in Sunset Park on Saturday. They want the company to stop buying from Reynolds, which is stocked with Pactiv products .

“They are a sweatshop!” said Shu Rong Lin, 47, a former Pactiv packer.To be sure, the factory had a relatively clean safety record, according to records from the Occupational Safety and Health Administration.

Pactiv media reps did not respond to an email and phone call seeking comment.Pactiv Corp. is the world’s largest producer of disposable food packaging products, according to the company’s website. The firm operates 55 manufacturing plants in seven countries and counts more than 12,000 employees.

The workers in New Jersey were paid minimum wage, barred from drinking water on the plant floor and often were forced to work excessive overtime after a high number of staffers were suddenly laid off, in 2010, several staffers said. The women filed a complaint with the National Labor Relations Board, arguing they were fired and the company was closed after they tried to unionize.

The board recently decided against hearing the case, a decision the women are appealing. Pactiv successfully argued it was forced to cut staff due to financial loses, and completely close the warehouse due to Hurricane Sandy damage.

As for the weekend rally, the workers hope that Costco, a famously pro-labor company, listens to their pleas.

“That’s their reputation and we are trying to get them to live up to it,” said Sarah Ahn, a member of Ain’t I a Woman, a workers rights group.A Costco rep did not respond to a request for comment.