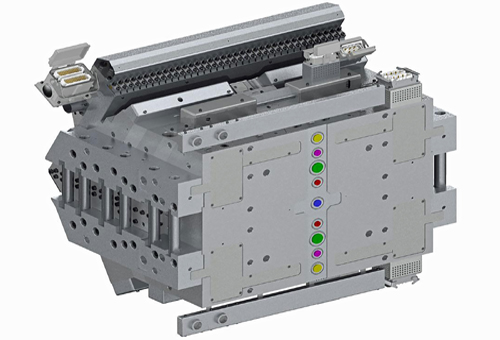 CHIPPEWA FALLS, WI, U.S.A., September 23, 2015: The latest advance in coextrusion technology from Nordson Corporation enables film processors—particularly those with high-throughput lines dedicated to a narrow range of products—to achieve tighter thickness tolerances for the individual layers in a multi-layer structure.

A Nordson EDI nine-manifold flat die, the first of its kind, has been successfully commissioned, producing nine-layer film from various resins. While the degree of improvement will vary with the application, in general Nordson EDI’s nine-manifold die technology promises to reduce variation in individual layer thickness from the +/- 15% tolerance often encountered with comparably advanced feedblock systems to +/- 5%, according to Sam G. Iuliano, chief technologist for Nordson EDI.

A manifold is a flow distribution channel inside the die whose complex internal geometry, engineered for a specific polymer, is designed to develop a uniform, streamlined flow and distribute the material to its full width. In a multi-manifold die, each polymer flow stream has its own manifold, and the layers are combined into a single structure only after each layer has been individually spread to its full width. By comparison, a feedblock combines multiple polymer streams into a narrow multi-layer “sandwich” that is subsequently distributed to full width in a single-manifold die. A chief reason why the multi-manifold method provides greater layer uniformity and thickness accuracy is that it avoids much of the layer-interface deformation that occurs when multiple layers pre-assembled in a feedblock are then spread simultaneously through the die.

“Nordson EDI customers around the world have long benefitted from multi-manifold coextrusion, using dies with two, three, four, or five manifolds,” noted Mr. Iuliano. “Engineering a nine-manifold die was a big challenge for us, since ten major die body segments had to be adequately fastened and heated. In addition, the nine flow channels were each custom designed for the specific layer that they were distributing, meaning that we had to accommodate flow channels of varying sizes and layouts in the design.”

For delivery of molten polymer from extruders to a multi-manifold die, Nordson EDI engineers distribution blocks, situated just upstream of the die, in a variety of optional configurations. The simplest versions have a fixed design, delivering the polymer melts to the entrances of the multi-manifold die in only one, dedicated layer sequence arrangement. More sophisticated distribution blocks provide the ability to re-route melt streams to change the sequence of the layers via exchangeable selector plates. The most advanced distribution blocks, in addition to selector plates, include feedblock sub-assemblies which combine some of the melt streams prior to the die, allowing for product versatility and for a greater number of layers than the number of manifolds that are in the die.

Having built more multi-manifold dies than any other manufacturer, Nordson EDI has applied its experience to make them trouble-free. Many Nordson EDI four- and five-manifold dies are in operation without leakage issues, even at throughput rates approaching 5,000 kg/h. For the new nine-manifold die, Nordson EDI designed for additional fasteners outboard of the main die bodies (in the end plate assembly area) to ensure proper sealing.

Nordson EDI can custom-design its Ultracart™ rapid cleaning station for a customer’s specific multi-manifold die. In addition, the Autoflex automatic lip adjusting units on the die are modular and can be readily detached, allowing convenient access to the die body fasteners. These systems make disassembly and reassembly simpler for periodic cleaning and preventative maintenance of the die.

The nine-manifold die is the latest in a wide range of coextrusion options available from Nordson EDI. The die system that Nordson EDI recommends for a given application depends on such variables as overall throughput rate, layer thickness and viscosity ratios, die width, number and type of product structures needed, and whether the melt processing temperatures for any of the melt streams are distinctly different. While the recommended solutions could range from a single-manifold die with feedblock to a full multi-manifold die with separate channels for all layers, often the recommendation falls between these extremes, combining multi-manifold and feedblock approaches. For example, if a five-layer structure included only one unique and critical cap layer, then a dual-manifold die might be recommended: The critical layer would spread through its own flow channel and the other four more compatible layers would be coextruded through the second flow channel.

Even as it develops advances in multi-manifold dies, Nordson EDI is committed to innovation in feedblock design, noted Mr. Iuliano. “Depending on the particular processing scenario, a single manifold die with a coextrusion feedblock may be the best way forward – for example, in a case where the extrusion tooling needs to produce many different structures with vastly different layer ratios. The feedblock approach generally allows for more product versatility as well as simpler cleaning and product changeover procedures. The multi-manifold approach is superior, however, in terms of product quality and consistency. Today, this approach is more than ever a practical, realistic alternative for producers of higher-order multi-layer film.”