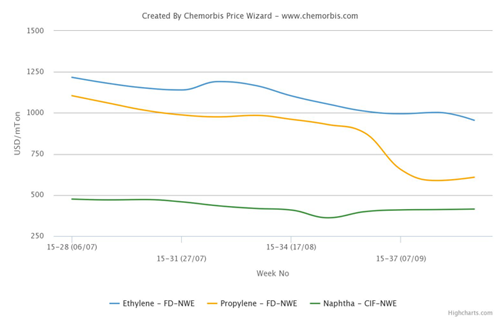 Players in Europe are voicing their expectations for new monomer contracts as the end of September draws nearer. New price decreases are anticipated for October while propylene prices are seen to be under more downwards pressure when compared to ethylene.These projections stem from the fact that spot propylene prices plunged by €220/ton since early September versus a €50/ton loss in spot ethylene prices during the same period.

In the downstream PP market, up to €150/ton decreases are passing on September transactions this week. For October propylene contracts, price drops between €50-80/ton may occur, according to players.

“PP supply has been comfortable this month while demand was satisfactory. We sold our materials with €130/ton reductions from August. New propylene contracts will probably settle lower although we are not sure about the amount,” an agent of a West European producer in Italy noted. Another seller predicted a €50/ton decline on the settlement.

A distributor in Italy has limited PP injection availability while he sold mostly BOPP and PP raffia with €150/ton decreases on the month. “The PP market is under stronger downward pressure than the PE market,” he opined. A trader in Belgium sold West European PP with €120-130/ton drops, saying, “Demand was good in the first week September, but it has slowed down significantly recently as buyers are on the sidelines now, expecting to see further price cuts in October.”

On the buyers’ side, a PP converter purchased only small volumes as he still had some stocks from two months ago. “We expect at least €70-80/ton drops on October propylene contracts,” he said.

In the meantime, INEOS declared a force majeure on PP output from its facility in Grangemouth, the UK. The 285,000 tons/year unit was previously shut for a planned maintenance in early August.

Regarding new ethylene contracts, no major drop is anticipated as spot naphtha prices are almost flat from early September. Expectations are calling for rollovers to €20-40/ton declines for now.

In the PE market, deals represent €60-90/ton additional cuts from initial September announcements while decrease amounts are larger between €100-180/ton on a month over month basis.

Packaging converters in Italy and Germany commented, “We have purchased only our needs this month as we expect further, albeit modest, discounts on PE prices in October.”