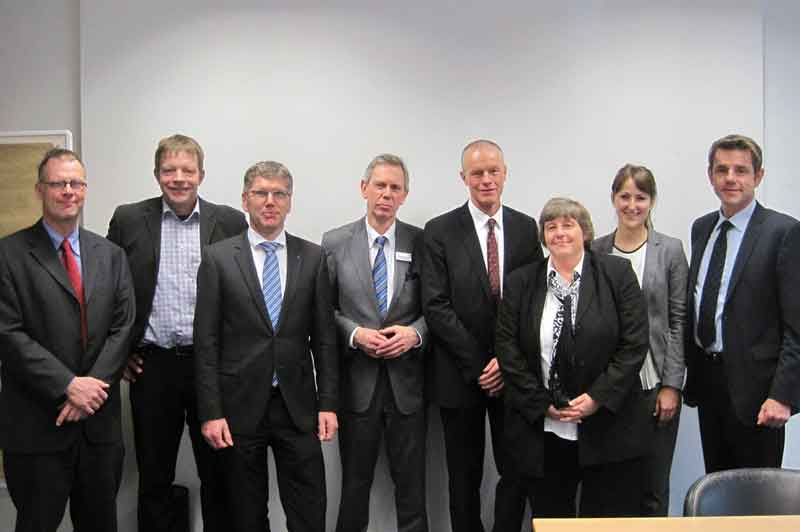 Photonics Congress 2014“: opportunities and risks from globalisation and new social processes of innovation

Berlin, Germany, 25 February 2014 – In both Germany and internationally, photonics drives innovation. In a fiercely competitive environment, this field of technology is associated with a highly dynamic evolution and a global market volume that is expected to reach about EUR 615 billion by the year 2020. In the period under review, this would equate to an average annual growth one-and-a-half times that expected for the global gross domestic product (GDP).

“We are cooperating closely with the involved industrial associations and federal ministries in bringing home to politics, the press, qualified young workers, and potential investors the pre-eminent significance of this key technology in safeguarding the future,” explained Thilo Brodtmann, Deputy Executive Director of the German Engineering Federation VDMA, at the “Photonics Congress 2014” in Berlin.

In spite of the weaker growth over the last two years, primarily as a reflex reaction to the exogenous shock of the preceding global financial crisis, experts on the sector see good prospects of long-term growth for the German photonics industry. In 2012, this turnover had grown by three per cent to about EUR 28 billion. In the course of 2013, the prospects have brightened considerably, especially on the investment goods sector, and the photonics industry has embarked into the new year with confident expectations. The growth rate for 2013 is likewise expected to be about three per cent, reflecting complete involvement in global trading. For 2014, all economic indicators are pointing to a path that will lead back to the long-term growth trend. Also the target turnover of EUR 44 billion predicted by the sector last year will be reached by 2020.

According to Brodtmann, who is also responsible for introducing new technology fields to the association’s portfolio, “we must look beyond our immediate needs, prevent errors, and continue to develop our strengths.”

Manufacturing technology and image processing power growth
The growth of the photonics industry in Germany has more than been boosted by the core fields aligned to manufacturing technology like laser machining, lithography, image processing, and measuring technology and instrumentation. These stout pillars of development have caused Germany’s share of the global market to grow to 20 per cent, considerably higher than the average eight per cent recorded over the whole technology field. This can be put down particularly to the high export ratio (last averaging 66 per cent), which is even higher in the said core segments with the promise of more to come. At the same time, the drop in exports inside Europe could be more than offset in most cases by expanding exports to Asia, and an additional boost in American trading in 2012. The R&D percentage on the photonic high-tech sectors remains at a high level. At nine to ten per cent, it lies far higher than the processing industry’s average, estimated at about four per cent by the Institute for Economic Research.

Marked power of innovation
According to a VDMA survey based on an innovation panel, there is a particularly high percentage of product innovations in those economically important lines of industry that directly incorporate photonics or utilise this “enabling technology” for its levering effects. These include, for instance, machine building, the automotive industry, electrical systems and electronics, telecommunications, and medical engineering. These high-volume sectors can expect overproportional production expansions ranging between three and eight per cent (see aircraft construction) for 2014.

VDMA reflects the full spectrum of photonics
The VDMA represents the variety and heterogeneity of the cross-sectional technology in an excellent way: seven VDMA professional sectors related to photonics joined forces via the “VDMA Photonics Forum” to realise synergies and to combine the existing competences. As a result the VDMA strengthens its position and its claim to leadership in the area of photonics. The network of the forum includes more than 500 companies and research institutions along the entire value chain – of which some 400 members are active primarily in the field of photonics. Taken all together, the photonic technologies represented within the VDMA stand for a combined turnover of nearly EUR 14 billion and some 56,000 employees. Inevitably these figures will include multiple references and about 25 per cent of that activity relates to sales and personnel outside of the field of photonics technology.

In order to integrate the perspective of the industry even more directly into the activities of the forum the VDMA appointed an industrial steering committee for photonics in December last year. High-ranking industry representatives from the various photonics sectors of the VDMA will work to enhance intra-association awareness and promote the key technology’s strong position in business and scientific policy, especially in terms of its general public awareness.

New Working Group „Additive Manufacturing“
More recently, the VDMA has embarked on a new Working Group “Additive Manufacturing” to cover yet another special field making use of photonics, for instance laser-assisted sintering and melting. This consistently takes up generative manufacturing processes as an industrial subject of the future. After all, the path from rapid prototyping to the economical small batch production of high-quality series components has already been walked, and the relevance to machinery and plant engineering is evident. An opportunity for targeted “cross-fertilisation” can be seen, for instance, for medical engineering, here implants and prosthetics from generative manufacturing for even greater individualisation potential.