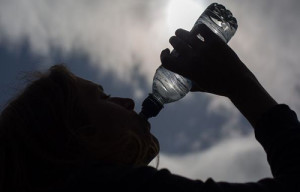 SAN FRANCISCO (CBS SF) — “BPA-free” is advertised as a safer version of plastic products , and are often used in water bottles, coffee mugs and children’s sippy cups, but a new study published by scientists at the University of California at Los Angeles suggests that “BPA-free” plastics may still pose a threat to the reproductive system.

New research out of UCLA, in conjunction with scientists at Shanghai University, suggests that BPS (Bisphenol S), the common replacement for Bisphenol A (BPA), “speeds up embryonic development and disrupts the reproductive system.”

Many manufacturers have stopped using BPA to strengthen plastic after animal studies linked it to early puberty and a rise in breast and prostate cancers, according to the study, published in the journal, Endocrinology. The report describes an animal study on the effects of BPA and BPS on key brain cells and genes that control growth and function of reproductive organs.

According to the U.S. Food and Drug Administration, BPA has been used in food packaging since the 1960s. In 2013, the FDA ended its authorization of the use certain BPA-based materials in the manufacture of baby bottles, sippy cups, and infant formula packaging, but BPA-based materials are still used in other product packaging.

According to the UCLA study, the U.S. and Europe were expected to manufacture more than 5 million tons of products containing these additives during 2015.

The study’s senior author, Nancy Wayne, a reproductive endocrinologist and a professor of physiology at the David Geffen School of Medicine at UCLA, said the “study shows that making plastic products with BPA alternatives does not necessarily leave them safer.”

When Wayne first uncovered findings regarding the harms of BPA in 2008, she discarded all of the plastic food containers in her home and replaced them with glass. Her family also tries to purchase food and beverages that are packaged in glass, whenever possible.

To measure the impact of BPS, the study’s authors used zebrafish as test subjects. They found that even low-level exposure to BPA and BPS, equivalent to the traces found in polluted river waters, altered the zebrafish’s physiology at the embryonic stage – in as quickly as 25 hours.

Zebrafish have transparent embryos that make it possible to watch cell growth as it occurs, which is why they were chosen for the study.

“Egg hatching time accelerated, leading to the fish equivalent of premature birth,” said Wayne. “The embryos developed much faster than normal in the presence of BPA or BPS.”

The UCLA and Shanghai University researchers tracked the fishes’ development of reproductive endocrine brain cells, which control puberty and fertility, and discovered that BPA overstimulates the zebrafish’s reproductive system. Wayne said the scientists found these same effects with BPS, which is found in BPA-free products.

Wayne said she suspects that the overstimulation of the neurons that regulate reproduction could lead to premature puberty and disruption of the reproductive system.

“Our findings are frightening and important,” Wayne said, explaining that, if BPA and BPS are impacting animals, then they are also likely to be affecting human health.

Their findings are not the only ones. A 2013 study out of the University of Texas Medical Branch at Galveston found less than one part per trillion of BPS can disrupt a cell’s normal functioning, and could potentially lead to metabolic disorders, birth defects or cancer.

The FDA has not ended its authorization of the use of any BPS-based materials in consumer products.