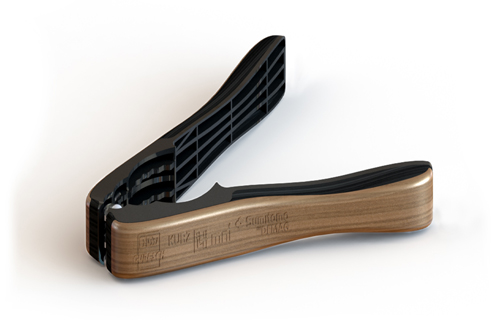 Less weight, more functions, attractive appearance – these attributes describe the result of the latest advancement presented by Sumitomo (SHI) Demag and its technology partners at Fakuma 2014, where a production unit will manufacture a lightweight nutcracker, which is then systematically reinforced by UD tapes a complex production method. The finished product with better functionality weighs 35 % less than its predecessor.

It demonstrates the integration of lightweight engineering and decoration requirements such as those needed for semi-structural optical parts in automotive applications, and proves Sumitomo (SHI) Demag’s expertise as a reliable partner for complex injection moulding system solutions. The partners involved in this brand new development, which was never shown before in this specific combination, were automation specialist M.A.i GmbH & Co. KG of Kronach/Germany, decorative foil specialist Leonhard Kurz Stiftung & Co. KG of Fürth/Germany and plastics processor HBW-Gubesch GmbH of Emskirchen/Germany.

First shown in 2014 at Sumitomo (SHI) Demag’s company stand, the lightweight production unit has now been advanced in an intense optimisation process that involved all technology partners: instead of organic sheet, this year’s nutcracker will be reinforced by a three-layered, so-called UD tape. In 2014, the nutcracker was merely decorated by a logo, which was embossed on the mould surface. Now, the decoration involves a 0.5 mm decorative foil. Injection moulded from PP-GF30 (Type Fibremod, Borealis), the reinforcing ribbing structure now has a maximum wall-thickness of only 3 mm, reduced from formerly 4 mm.

In 2014, the nutcracker’s toothed structure was produced with the help of metal inserts. In the current version this structure is rendered as a corrugated contour, which is integrated in the insert moulding process. With only 92 g, the new product weighs 35% less than last year’s nutcracker, which weighed 142 g, but provides a better functional capacity. As in 2014, this current exhibit proves Sumitomo (SHI) Demag’s comprehensive system expertise.

The reinforcing UD tapes made from Celstran CFR-TP PPGF70-013 (Celanese) contain continuous glass fibres in unidirectional (“UD”) orientation with a significantly increased tensile strength parallel tothe fibre direction. This approach allows plastics processors to reinforce their products by systematically placing one or several UD tapes to suit their requirements in terms of wear and loads. This is only one advantage of UD tapes over organic sheet, which is mainly made from fibre mats with a 90° degree fibre angle, which can only provide an isotropic reinforcement.

UD tapes have the same thickness of a fibre mat, but provide more tensile strength in the direction of tension than organic sheet. Hence, if the product is reinforced with thinner and more lightweight UD tapes, it still has the same tensile strength as products reinforced with heavier and thicker organic sheet. The currently exhibit includes a bundle of three thin UD tapes, which have the same overall thickness as the former reinforcement product (organic sheet) but offer a more systematic reinforcement.

Another highlight of this exhibit is the newly developed M.A.i heated gripper system, a so-called hot-handling device. This system controls the heating of the tapes prior to their insertion into the mould. The result: gentler temperature control and the option of shorter processing times. Enhanced with decorative foils, the final product is suitable for all visible applications such as those required by the automotive industry.

Essential elements of this production unit include a Systec Servo 210 injection moulding machine, a six-axis robot from Yaskawa with gripper system and hot-handling device for UD tapes, removal stations for the metal inserts and the decorative foil, a heater and removal station for the UD tapes, a cutting station for sprue removal and a riveting station for connection both product halves. The removal and insert gripper at the robot’s head picks up the foil, the inserts and the UD tape and moves into the open mould. There, it first removes the finished part, then places the foil, the UD blank and the metal insert into the now empty cavity. The mould closes and the insert moulding process begins anew.

An intelligent production efficiency module, “activeRemote” integrates both the robot and any downstream equipment into the injection moulding machine’s NC5 plus control system. It records, processes and visualises production and process data even for complex automation tasks. Virtual network computing (VNC) integrates disparate partner systems, and also allows integration and control of any touchscreen devices. Malfunctions and production downtimes are displayed by the NC5 plus control and can be remedied to prevent the production of waste scrap.

Systec Servo is also equipped with an energy saving “activeDrive“ module, which combines a frequency-controlled high-performance motor with a hydraulic pump. It restricts the capacity to the amount required by the corresponding cycle sequence, allows parallel movements with only one hydraulic pump, reduces the machine’s noise emission and is distinguished by a keen price/performance ratio. This module cuts the machine’s energy consumption by up to 50 % compared to standard hydraulic systems, particularly during processes operated with partial loads or empty runs. The “activeDrive” module is provided as standard for all Systec Servo machines.

For older Systec machines, this module is available as a retrofit option. In addition to the “activeDrive” module, the Systec Servo 210 that is presented at Fakuma 2015 is equipped with the “activeCool&Clean” cooling and filter system for best oil quality and a long oil service life, and with the new axle control module “activeMotionControl” for better production quality and repeatability and a unique option for running parallel movements within one hydraulic cycle.

Alongside this production unit, Sumitomo (SHI) Demag will present an El-Exis SP 200 high-performance machine in live operation, producing gourmet food containers with the cycle time of far less than two seconds –the fastest automated exhibit, and an all-electric IntElect 100, equipped with “activeFlowBalance” for balancing the filling of its four cavities, stabilising the process and boosting the quality of moulded parts. Our partner companies Sepro (Hall A1, Stand 1203) and ONI (Hall A5, Stand 5103) will show two additional machines in live operation. Sepro will demonstrate the highly complex production of a plug connector made from PBT-GF30 in a delicate mould with sophisticated separations, which was manufactured  by Stamm AG, Hallau/Switzerland.