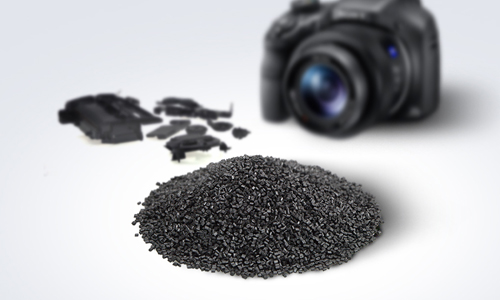 When Sony resolved to do something about reducing the amount of virgin, oil-based plastics it used to manufacture its products , it soon became apparent that the company was not one for half measures. Next to reducing the amount of plastic used and introducing recycled plastic in new products, Sony decided to develop its own recycled plastic. The result was SoRPlas: Sustainable Oriented Recycled Plastic.

Originally made by Sony for Sony, the material has proved such a success that the company has now decided to sell it to external parties.

Developed in 2011, SoRPlas is flame-retardant recycled plastic comprising polycarbonate plastic recycled from materials such as optical discs from discarded DVDs and optical sheets (light-diffusing films) used in LCD televisions. These recycled materials incorporate Sony’s proprietary sulfur-based flame retardant to achieve a highly durable, highly heat-resistant plastic with a percentage of recycled content that can reach as high as 99%, depending on the application.

The first Sony product to employ SoRPlas was a Bravia TV, introduced in 2011, KDL-40EX52H. The plastic was employed in the bezel (TV frame). Since then, SoRPlas has been incorporated into a wide variety of Sony products, the latest of which is the 4K TV X85 series (65 inch), released in 2014.

Now, Sony has announced that from the beginning of October 2014, it will commence selling SoRPlas outside the Sony Group. The material will be made available to manufacturers and business operators such as consumer electronics retailers, both within Japan and abroad, with, as the company says “the objective of contributing to society by promoting the reuse of resources and reducing environmental impact.”

Three SoRPlas grades have been developed to meet the specific requirements of a variety of products. The first, SPL-EC30, offers good moldability; the second is a high impact grade known as SPL-EC50; and the third, SPL-R20T, offers good flame retardancy.

Sony says that it is marketing these three grades to external parties at approximately the same price as conventional flame-retardant polycarbonate plastic.

The Ways and Benefits of Recycling

Mettler-Toledo webinar offers guidance on the testing of petrochemicals