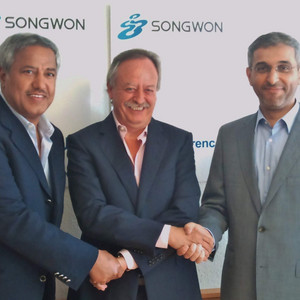 Ulsan, Korea – February 5, 2013 – Songwon Industrial Group, the second largest manufacturer of polymer stabilizers in the world and a leading global producer and supplier of additives and other chemicals to the plastic industry, announces preliminary, unaudited total sales revenues for the 4th quarter of 2012 of 151’594 Mil. KRW with gross profits of 30’872 Mil. KRW and a profit for the period of 3’834 Mil. KRW.

Hans-Peter Wüest, Chief Financial Officer and Member of the Songwon Industrial Group Executive Committee, stated: “We can be very satisfied with our performance in 2012. The first three quarters of the year were characterized by growth and although sales have softened in Q4, profits have remained strong, contributing to a doubling of profits for the year of 20’299 Mil. KRW versus 10’033 Mil. KRW in 2011. This has been achieved through judicious cost control and productivity improvements and is a function of our strategic investment in back integration, together with our ability to respond rapidly to market needs with new products.”

Jongho Park, Chairman and CEO and Head of the Songwon Industrial Group Executive Committee, added: “To say that this has been a challenging year would be an understatement, however I am delighted to say that the business has delivered robust results that can be attributed to the strategy we have initiated and the structure we have deployed over the last three years. These results will drive our investment in new products and operations to meet customers’ needs in the growth regions. OPS (One Pack Systems) will continue to grow on the back of increasing demand for this exciting product form. We will consolidate our efforts in thioester antioxidants through our recently announced joint venture Songwon Baifu Chemicals (Tangshan) Co., Ltd. and we will see our range of HALS (Hindered Amine Light Stabilizers) in collaboration with Sabo SpA, deliver solid growth as well as the introduction of new products. All in all, 2013 promises to be just as rewarding for Songwon as 2012.”