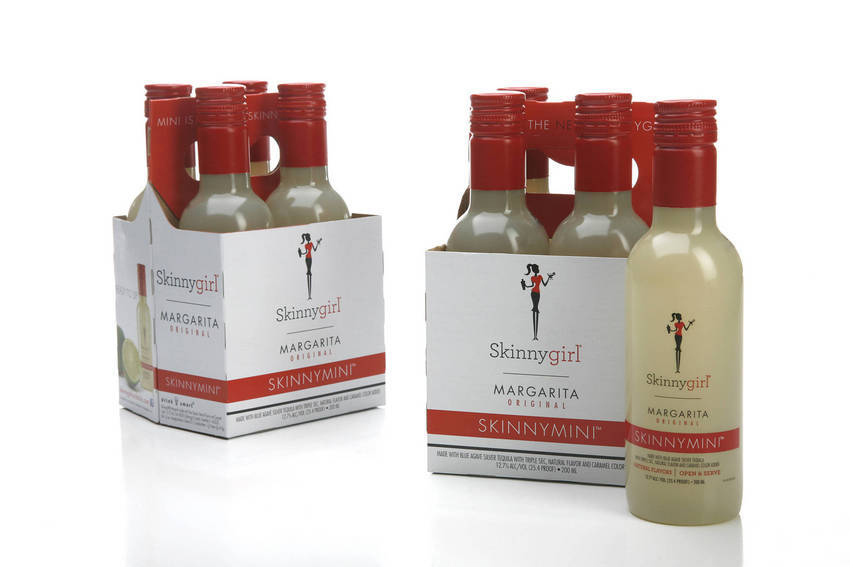 It’s not hard to figure out the target market for the Skinnygirl line of cocktails. I’m not sure many men are lining up at the liquor store to get their hands on the ready-to-drink, low calorie cocktails with the name ‘girl’ in the title.

While arguably the spirits industry has catered mostly to men, the Skinnygirl brand is proving that women are also big fans of spirits. Made famous by entrepreneur and TV personality Bethenny Frankel, the Skinnygirl cocktail line was the fastest growing brand of spirits in the U.S. last year, with about a 388% sales increase. The company moved 586,000 cases in 2011, according to Technomic.

The popular brand expanded into new territory when brand owner Beam announced it had extended the Skinnygirl Margarita line to 200-ml PET Bottles. Previously only available in 750-ml glass bottles, Beam, a global spirits and wine company, recently launched Skinnyminis, a four-pack offering of the Skinnygirl Margarita ready-to-serve cocktail in 200-ml barrier PET bottles from Amcor Rigid Plastics. The custom container represents one of the first 200-ml barrier PET bottles for the spirits industry, according to Amcor.

“For us, the size extension made sense due to PET’s value and because consumers asked for the product,” said Frank. “In the single-serve size, unbreakable and portable PET bottles provide an entrée into new venues that do not allow glass because of the potential for breakage, opening up new sales opportunities.”

Skinnyminis have been sold all season at Yankee Stadium in New York city and other similar venues including sporting events and concerts. Frank said they wouldn’t have been able to get into those venues with glass. Lynne Brophy, Amcor Commercial Director of Spirits, Wine & Beer, told me that the original design was pretty easy to scale down to a look alike PET.

The 200-ml PET bottles preserve the brand image and look of the 750ml glass containers. The slender, long-neck container is also designed to withstand high top-load impact. A roll on, pilfer-proof (ROPP) premium aluminum screw top closure from Amcor Flexible Capsules, which requires top load strength of up to 200 lb of force, makes the entire package supplied by Amcor, the company stated.

A unique barrier PET resin with an oxygen scavenger offers protection from oxygen ingress and provides extended shelf life. A UV additive is used for the bottle to protect the product from ultraviolet light and preserve the product color. The PET bottles are also one-sixth the weight of glass bottles and are unbreakable and recyclable.

Amcor, which has also provided PET bottles for wine companies for several years, said it continues to work closely with other wine and spirits makers who seek alternative packaging. PET barrier technology is also being targeted at other markets for oxygen sensitive products. If more spirits add PET to its line of packaging, I’m sure the sector, as a whole, will “cheers” to that.