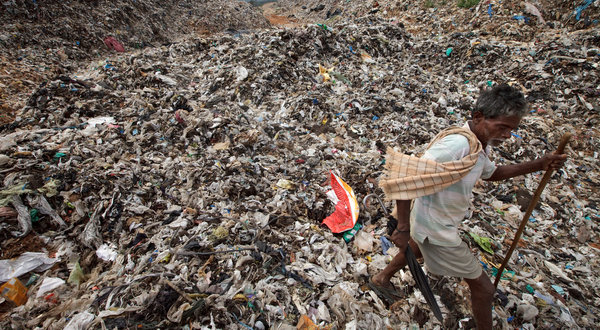 Outside Bangalore’s last official landfill, the garbage trucks regularly lined up here for hours, their burdens putrefying in the afternoon sun. A stinking mountain of trash, the landfill has been poisoning local waters and sickening nearby villagers. Another dump site was in even worse shape before it was closed recently after violent protests.

Bangalore, the capital of India’s modern economy and home to many of its high-tech workers, is drowning in its own waste. Last week, local villagers blocked the roads leading to the Mandur landfill on the city’s outskirts even as many of Bangalore’s trash haulers went on strike, saying they had not been paid in months. Some neighbourhoods have not had trash pickups for nearly three weeks, and vast mounds of garbage are scattered through what is known in India as the Garden City.

Trash is India’s plague. It chokes rivers, scars meadows, contaminates streets and feeds a vast and dangerous ecosystem of rats, mosquitoes, stray dogs, monkeys and pigs. Perhaps even more than the fitful electricity and insane traffic, the ubiquitous garbage shows the incompetence of Indian governing and the dark side of the country’s rapid economic growth. Greater wealth has spawned more garbage, and the managers o4f the country’s pell-mell development have been unable to handle the load. “Bangalore used to be India’s cleanest city,” said Amiya Kumar Sahu, president of the National Solid Waste Association of India. “Now, it is the filthiest.”

Bangalore’s garbage crisis grew directly out of its stunning success. Technology companies started settling in Bangalore in the 1980s. As they grew, many created pristine campuses hacked out of urban chaos, supplying their own electricity, water, transportation and a rare sense of tranquillity. But the dirty secret of these campuses and the gated enclaves where their executives built their houses is that they had nowhere to put their trash. Many hired truckers to take the mess out of the city, careful not to ask where it went. The truckers found empty lots or willing farmers and simply dumped their loads.

The city soon followed the companies’ lead. Its door-to-door trash pickup program, started in 2000, was seen as a model in a country where comprehensive municipal trash systems are still rare. But few — including city officials — knew where the trash was taken or, after landfills opened, how it was disposed of. “We never followed scientific landfill practices,” Rajneesh Goel, Bangalore’s chief civil servant, said in an interview. As Bangalore’s population exploded with the success of its technology industry, the stresses in the waste system came close to a breaking point. Now, with Bangalore’s last landfill here in Mandur about to close permanently and the city running out of abandoned quarries to quietly divert a day’s load, the system may simply collapse.

“All that groundwater contamination is going to come to us; more than 300 of our lakes are already gone,” Goel said at a recent public meeting where he pleaded for help. “The problem is getting out of hand, and eventually it will swallow us up. We have to do something.” The choice facing Goel is stark: find a new place to dump 4,000 tons of garbage a day, or make that garbage somehow disappear. Since the city’s atrocious oversight of past landfills has made new ones all but impossible to secure, he is now trying to create — almost from scratch — one of the most ambitious recycling programs in the world.

Goel conceded that success was far from certain. “I’m trying to give you a very rosy picture, but don’t get taken in,” he said after outlining his plans. “It’s a 50-year-old story, and there are certain constraints in the system.”

In the past, private sector companies grew like gangbusters in part by shutting out the rest of India and avoiding interactions with a dysfunctional and corrupt government. But top executives here now say they can no longer turn their backs on the chaos that surrounds them. “Building these islands, or expanding them to become the whole of India, I don’t believe will work,” said S. Gopalakrishnan, executive co-chairman of Infosys, India’s leading technology giant. He gestured out the window at his company’s immaculate campus, which included a glass pyramid, food courts, basketball courts and gardens. “At some point, the resistance from the outside world will overwhelm them.”

Indeed, India’s dysfunction is now taking a toll on Infosys’ well-known productivity, Gopalakrishnan said. His employees’ commutes are longer, their fights with schools more intractable. “If you have just 100 employees, the impact is not so much,” he said. “But with 150,000 employees, more and more the environment affects us as individuals, and, yes, it slows things down. At some point, you can’t shut your mind to what is happening around you.”

Few expect Bangalore’s municipal government to solve the problem itself. Instead, a network of nonprofit groups has sprung up to carry out recycling schemes; these nongovernment organizations have embraced the thousands of rag pickers who daily paw through the city’s garbage to retrieve valuable refuse like paper, glass and certain plastics.

“We already have an informal system of 15,000 waste workers, and you have N.G.O.’s that can empower them,” said Kalpana Kar, who has served on the city’s waste management advisory council for more than a decade. “Let us make them all part of the formal system.”

For that system to work, however, households in Bangalore must separate their trash into wet food waste, dry recyclables like plastics and paper, and medical waste. Ms. Kar now spends much of her time trying to persuade Bangalorians to do just that. On a recent day, she stopped just outside her door and pointed to a servant leaving an expensive home nearby.

The servant carried two buckets of trash across the street and dumped them in an empty lot. Stray dogs and a feral pig soon came to feed but left behind the plastic and other garbage. “What are you doing?” Ms. Kar yelled at the servant.

He shrugged and pointed at his employer’s house. Ms. Kar had tried many times to dissuade the servant from dumping the house’s garbage in the increasingly disgusting lot, she said, but his employer had dismissed her concerns. “People in India think that if their own house is clean, the problem just goes away,” she said. She is nonetheless optimistic that Bangalore will be able to recycle nearly all of its waste, which would be a remarkable accomplishment for a city of eight million. “The city is at its knees,” she said with a shrug. “We don’t have a choice.”

Just outside of Bangalore, a growing number of pig farms are picking up food waste from the city’s hotels and restaurants. At one farm, enormous pigs squealed in excitement when a truck arrived packed with barrels of discarded food. Workers dumped the cucumber skins, watermelon rinds, uncooked sausage, watery lentils and more into a concrete pen where a barefoot woman waited. Using one hand to hold her sari, she used the other to pick out plastic bags and ice cream cups. She was soon covered in slop. Eventually, another worker shoveled the food into pig pens, and the pigs snorted in happy gluttony.

For Vankatram, a pig farmer with just one name, the price of getting this discarded food was that he had to haul away the hotels’ dry waste, giant bags of mixed plastic and paper. Such waste could be recycled, but Mr. Vankatram instead burned it. Spot trash fires are common in India and contribute to choking air pollution.

Author plasticsinfomart 98
Delivery times shortened significantly With the introduction of flow assembly and the modernization of the machinery in his factory robots ENGEL respond to the...
Read More