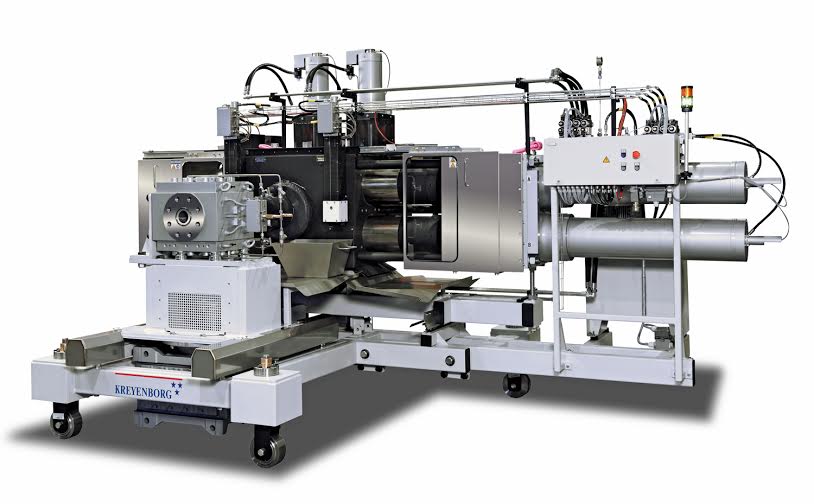 MÜNSTER, GERMANY, December 3, 2013: A concept that combines screen changer and gear pump on a single movable cart simplifies deployment of these components in an extrusion line, takes up less floor space than separately mounted machines, and provides easy access for replacement of filter media, it was announced today by Nordson KREYENBORG GmbH.

Developed at the request of one customer, the concept of a single support cart can be applied for equipment custom designed by Nordson KREYENBORG for other companies, including extrusion processors, compounders, and recyclers, replacing the standard configuration involving separate carts for screen changer and gear pump.

The single cart is mounted on fixed casters that permit transverse-direction movement into and out of the extrusion line, while precisely aligned movement in the extrusion direction is provided by rails installed on the floor. At the same time, linear guides on the cart permit independent extrusion-direction movement of the gear pump and screen changer. To save space and facilitate access for changing screens, Nordson KREYENBORG has in effect turned the gear pump onto its side so that its drive can be mounted below the pump.

“Nordson KREYENBORG’s use of a common cart for gear pump and screen changer simplifies deployment of these components in the extrusion line and permits faster and easier maintenance,” said Mr. Markus Walbersmann, research and applications engineer. “The gear pump in this system incorporates the same features as our traditionally configured equipment, including a cooling system that enhances the effectiveness of the thread shaft seal, which is particularly important for low-viscosity materials.”

The rate of coolant flow is adjustable, and the coolant may be either air or de-mineralized water. Customers are asked to specify the coolant in advance so that Nordson KREYENBORG can design the gear pump for optimal performance. If the material to be processed is shear-sensitive, Nordson KREYENBORG recommends its Type 03 gear pump to minimize residence time.

Despite slower growth, machinery investments in China push on

Author plasticsinfomart 63
According to the latest statistics from China Customs, in January 2011, China imported 1,010 plastic processing machines at a value of US$180 million, while...
Read More