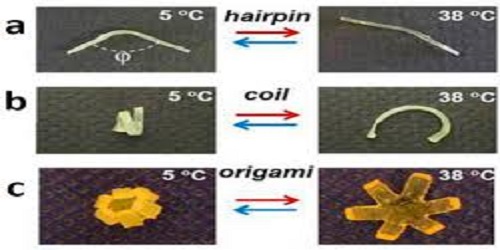 Shape memory polymers are “smart” plastic materials that can be transformed into a temporary shape and then return to their original shape, triggered by an external stimulus such as heat or pressure. These polymers can be programmed to create highly complex shapes – coils, knots, even origami-like shapes – but the transformations have conventionally been irreversible.

In recent years, reversible shape memory has been enabled in certain polymers, but achieving shape switching across broad classes of polymers has been elusive. Usually, switching from one shape to another requires a persistent external mechanical force. Now, researchers have turned to elastomers – polymers with elasticity and viscosity – with carefully designed chemical structures.

A team of scientists from the University of North Carolina (UNC) at Chapel Hill, the University of Connecticut, and the U.S. Department of Energy’s Brookhaven National Laboratory, led by Sergei Sheiko (UNC), has devised a general method for enabling reversible shifting between programmable shapes. They used semicrystalline elastomers with uniform chemical compositions of various kinds and achieved shape transformations without applying a persistent external force. Their work was described in a paper titled “Shapeshifting: Reversible Shape Memory in Semicrystalline Elastomers,” published online in February 2014 in the journal Macromolecules.

“We’re uniquely able to achieve reversible transformations, not just one-way shape changes from one state to another, by taking advantage of interactions between crystalline polymer domains and chemical network of polymers,” said Oleg Gang, group leader for Soft and Bio NanoMaterials at Brookhaven’s Center for Functional Nanomaterials.

He explained that shape memory materials are vital for minimally invasive surgery, hands-free packaging, the aerospace industry, and microrobotics. Reversible shape memory polymers are particularly attractive for these fields, as they allow for highly complex shape transformations on broad length scales, and in response to a vast array of external stimuli – mainly heat, but also light, electro-magnetic fields, and even acoustic waves.

Gang and his collaborators fabricated elastomers, twisted them into coiled shapes at 140°F, and then cooled them to about 40°F. Once reheated, to 100°F, the straight elastomers again took on the coiled shape spontaneously, without any applied force. The angles of the coil were repeatedly reproduced, even after many heating and cooling cycles.

Similar reversible behavior was shown in a straight polymer bending to a predetermined angle and an origami-like star or gripper folding and unfolding on its own. Gang used small-angle x-ray scattering (SAXS) at Brookhaven’s Center for Functional Nanomaterials and on beamline X9 at the National Synchrotron Light Source to determine the nanoscale structural changes in the polymers during shapeshifting and the molecular mechanism that causes the reversibility.

“We are only beginning to understand the molecular, nano- and meso-scale effects in this material. Many structural changes are happening on various scales simultaneously, and it is not fully clear which phenomenon dominates,” Gang said. “The complexity of these materials arises from the interplay of a scaﬀold of small crystallites and a chemically cross-linked polymer network, which makes the study more challenging but also more stimulating. We are excited about new possibilities that NSLS-II will provide, since it will address our currently limited ability to probe structure and dynamics at multiple scales in real time when macroscopic transformations occur or mechanical stress is applied.”

Biodegradable Plastics Market in Europe Forecast to Grow at 12% CAGR

Author plasticsinfomart 451
ENGEL is pleased to announce the launch of the WINTEC machine range to theUK marketWINTEC is an ENGEL Group company based in Changzhou, China,...
Read More

Author plasticsinfomart 91
The winning Extruders Market business report includes both qualitative and quantitative aspects of the industry in each region and country mentioned in the market research study....
Read More